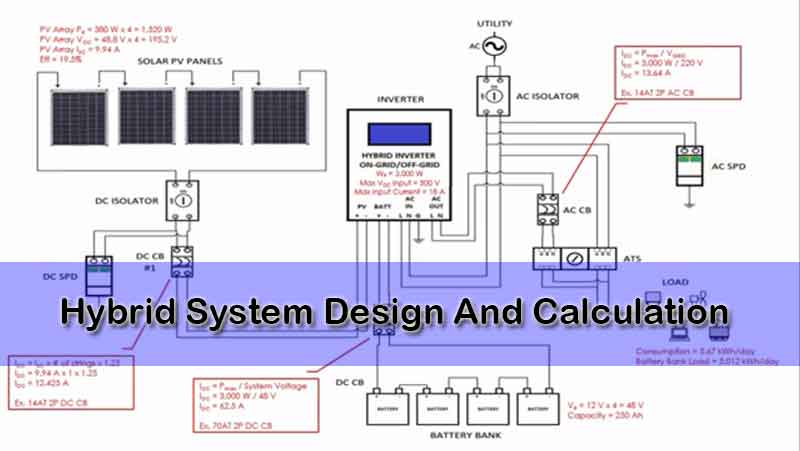 The hybrid system is almost the same as the upgrade system that we have discussed in the previous lecture. The only difference is the solar charge controller and the inverter. Now is combined,1 piece of equipment. There is also added equipment which is the ATS or the automatic transfer switch. This one switches between your normal power source. In this case, your solar power setup, and you are reserved power source or your backup source which is yours.

There are four steps involved in designing a hybrid system:

2. Sizing of the solar array

Now, that we have calculated how much power we can shoot daily. We also need to determine how much Sun is getting or what we call the Sun Sun peak hours. So, the Sun peak hours is the duration at which Phoebe’s intensity of sunlight is 1,000 watts per square meters, and the average sun peak hours is usually around four to five hours. And that value varies as you move away from the equator.

There are locations where they have longer days, and I will have longer nights. So, this bit of information, I will make you google yourself, find out what for maybe some peak hours to compete for the required capacity of our solar panels. We should divide the daily consumption where the Sun peak hours, and multiply that by 1.3. So, that’s 5.6 – 7 kilo divided by 5 hours multiplied by 1.3.

We will require a minimum solar PV power of 1,475 kilowatts. Now, suppose we have a solar panel with a power rating of 380 watts to compute. How many of these are required? We just need to divide the power by the rating of our solar panel which is 380 watts. So, 1,475 kilowatts divided by 380 watts begin 3.88, or we round this up. So, we need 4 pieces of this 380 bucks.

3. Sizing of the inverter

Step number three that’ll be sizing the inverter to size our hybrid inverter. We need to take the actual power output of our solar PV array. The solar panel that we’ll be using as a power rating of 300 watts, and then multiply this by the quantity which we have computed previously creatures for the resolve would be 1520 watts. This is the output of our solar PV array then this will also be the minimum power rating of one of our inverters.

But, since we don’t have an inverter rated exactly, at this rating of 1521, we will choose the next higher value available. So, in this case, we’ll choose a hybrid inverter greater than 3 kilowatts. Next, we’ll check if the other inverter parameters such as the voltage input, and the current input car are enough with respect to our solar panel.

Okay now, suppose we will connect our solar panels in series. Let’s check its output voltage now for a series connection. The voltages are additive, so the total voltage output will be 48.8 volts times 4 because we have fallen for solar panels in series connected, the total voltage is 195.2 for PV. This value is less than the maximum voltage input of our inverter which is 540. So, this inverter is okay.

Now, let’s see if the maximum input current is also enough for a series connection. The current is the same, which means for solar panels connected in series for each with each having a short-circuit current of 9.94 amps. The current output of our solar array will still be 9.94 amperes. This is still lower than the maximum input current that our inverter is rated which is a canal of 18 amperes. So, this inverter is still very much sufficient.

4. Sizing of the battery bank

I think the battery bank involves load analysis on the plan appliances you want to run on batteries. So, in here, you list down all the electrical equipment in your house, and for example, we suppose we have LED lights already, TV, electric fan, a fridge, laptop, washing machine. Next, you need power for each of our appliances. The next step is to push down the quantity for each of our appliances, for example, we have 4 LED lights, 1 TV, 2 fans, 1 fridge, 1 laptop, and 1 wash machine.

Next, we multiply this unit power by the quantity to get the total power for each type of equipment.

We shall outsize the battery bank capacity depending on 4 factors namely; the daily power consumption which we have calculated in the previous, the DoD or the depth of discharge of the battery, the efficiency of the battery, and the system voltage.

Okay, so now, that we have all the data that we need. Let us build our hybrid system. The hybrid system is composed of 4 major parts.

The Hybrid System Design is connected to the power grid. So, during the day, it can fashion like an ungraded system while also charging the batteries, and during the night or during blackouts, the batteries will be utilized to power up the loads, just like be off-grid system. But when the stored energy in the batteries is depleted, the APS automatically switches to the reserve or backup power source, and that will be the grid.

In step number three, we calculated that the inverter should have a rating equal to/or higher than the power output of our solar array which is 152 watts, and this example was chosen and worked with the power rating of 3 kilowatts which is higher than this. In step number four, we have chosen which appliances are to be operational during the night, or during blackouts. We have computed that the total load consumption would be around 5 kilowatts. So, in order for a battery bank to supply part of this amount of load, we need around 4 pieces of battery, rated at 250 ampere-hours each.

Well, the next step is to compute for the circuit breakers.

You can watch the full video for Hybrid System Design information.