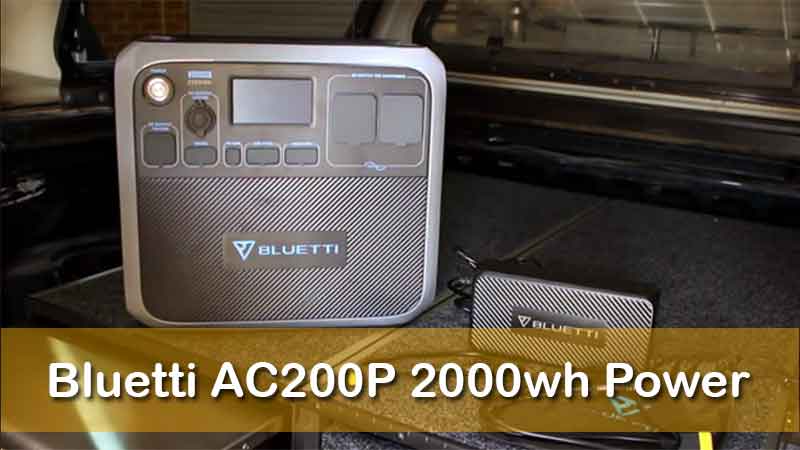 So, right off the bat, one of the first considerations for this unit is going to be the price. These run about two thousand nine hundred dollars, not on sale Australian, and that’s without any solar panels. That’s just the unit and the accessories. Now, you might be thinking that’s a hell of a lot for a glorified battery box, really, but when you factor in the cost of inverters, internal fusing, the battery management system, and the built-in solar MPP charger, you’ll find that it’s really not that far of a traditional dual battery system in an off-road vehicle or touring rig.

So, what exactly do you get for the money? Well, you get the unit itself which is equipped with a 2000 watt pure sine wave inverter. You get a big super-safe lithium-ion phosphate battery which is rated at about 3500 cycles, which is incredible. It has its own built-in battery management system with displays and a touchscreen. It works perfectly, you get a built-in MPPT solar regulator, and it has approximately 2,000 watts of power that you can use.

This is going to be lower, if you actually test it, you can go watch a more technical video, say hobo tech or one of the guys. They’ll go through what happens it’s not actually 2,000 watts, it is a bit lower. Now, you get all of the different features that are included which is this here. This is probably why most people use it. It’s a 12 volt 25 amp aviation plug. Now, what you can do is, you can get a second one of these cables.

They are extremely hard to get your hands on in Australia. You have to order it from China, because our Bluetti Australia doesn’t actually sell this cable separately, and I tried to order one from the US, but they haven’t replied to me. So, it’s a bit of a bummer, and what you do is, you use that cable in this socket, and you can run it to a fuse block, and then run all your 12 volts accessories to the fuse block, and then through this one cable.

So long, as you keep the amps pretty low, you should be able to run the fridge lights, and all the normal things that you would in a traditional dual battery setup, you get a dc 12 volts 10 amps output. So, if you just want to run a fridge, you can just use that with no real worries. You get two 12 volts, three amp dc outputs.

Now, I don’t really utilize these as much as I should. I’d much rather have a second sig socket just because it would suit my needs a little bit better. You get the USB-c, 3 fast charge, 4 USB, 5 volt 3 amp outputs, 2 – 24 volt, 2,000 watts pure sine wave inverter outputs to run literally anything you can pretty much run a fridge off them, and then you get the two 15 watts a wireless charging platforms on the top.

The second consideration is what exactly are you going to be using this unit for. Especially, here in Australia. The season is going to affect if this is going to run for you perfectly. It does have a few downsides being a lithium battery. It has operational temperatures. Now, the operational temperature stated for this is 0 °C to 40 °C which, unfortunately, where I’m from, especially in winter, it’s freezing.

We get snow all the time, and in summer, it’s blistering hot like it really is. It struggles in summer, and in winter to perform optimally when it gets too hot, it will shut down, and if it’s outside of those temperatures, it can use power, but you’re not going to be able to charge it, which is the big thing. So, if you’re going to go on a big week journey, it might be worth looking into a secondary battery, in case this one shuts down.

Thirdly is going to be the durability of the unit. Now, I haven’t had any problem with vibration, but it’s really not that sturdy, especially, when you’re doing hard tracks. You need to make sure that it’s anchored down in a really safe location. Don’t let any water get near it, try and avoid dust, dirt, and debris. Because it is going to damage the unit, and it’s not as sturdy as a traditional dual battery that you can just throw in the back, wire it up, and then she’ll be right.

The fourth consideration is pass-through charging. Now, a lot of us use dual battery setups. You put your second battery in you, wire it up to solo. You have it hooked into the vehicle’s alternator, and you’ve got your fridge that runs 24/7. You just set and forget, and that’s the end of it.

Now, Bluetti AC200P 2000wh Power does have the option for pass-through charging. So, you can have solar hooked up, and your fridge hooked up, and it will charge the battery and power your fridge at the same time. But if you go onto Bluetti’s website, you’ll see that it isn’t recommended, unfortunately, and they state that it will damage the life of the battery. And if you break this battery, there’s no way to replace it, and that’s the biggest downfall which leads into my fifth consideration.

So, the final consideration is just going to be overall customization. Now, with a traditional dual battery system, it’s really easy to add and remove components and hardwire them to suit your exact needs and wants. Now, the Bluetti does have the 25 amps aviation output, but you still are restricted to under 25 amps, and these, as I said are super hard to get a hold of. Now, I ordered one of these from China. Approximately maybe six or seven months ago, but it still hasn’t arrived. So, we’ve just been making do by having the aviation plug-in and the XT90 hooked up to the solar, and when the sun goes down, or we’re not getting any charge, I’ll unplug this pop it into the aviation out, and then this goes to the fuse block which is wired to all of our lights and the compressor, and all of that stuff.

The only thing that I think that they could do to improve this unit would be a replaceable battery. So, pretty much turn this in to a more traditional battery box with your built-in inverter, battery management system, solar charge, all of that same functionality but be able to upgrade and replace the battery easily without any worry, or buy just the unit itself and put it on existing batteries to save yourself a little bit of coin.

They do have an expansion pack coming out which will over double the capacity of the unit. But from what I’ve seen, it’s going to be upwards of a thousand dollars which is a bit pricey. In my opinion, especially, when you’ve already dropped three grand on this, just to get a bit more power.

So, would I buy the unit again? Now, this is a bit of a tricky one, and I really had to think hard about it. Because I see the pros and cons of each. Now, for my family and my needs, this thing is perfect, except for the operating temperatures. Just because where we are, I really have to be mindful of that, and because there’s no bloody replaceable battery. That’s the only downfall to it.

But other than that, it’s a fantastic unit. I can put it in the trailer if we’re going for a big trip, throw it in the back of the ute for a weekender, and power anything if we have a blackout or a storm that doesn’t really happen. But just in case, it will keep all of our food safe. So, I really think, I would buy it again and I would recommend it to people but as soon as a company comes out with a battery box that has all of these features, you can replace the battery easily, upgrade it, change it out.

Then, this is when this thing isn’t going to be worth it anymore. So, if you’re a company, and you want to kind of capitalize on the market, build one of these but in a traditional battery box where you can replace this with additional upgrades. So, you can add in whatever battery you want, you can upgrade the battery size, and all of those great things. So, there it is. There are five considerations before you buy a Bluetti AC200P 2000wh Power.