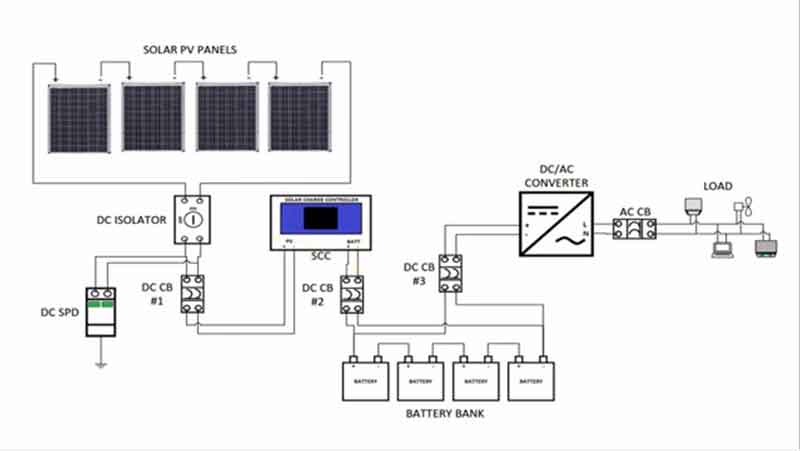 So, here are the steps. Step one will be the load analysis. So, assuming that, this installation is in a very remote area, and far away from the power grid. We will take a different approach as compared to the on-grid setup. On-grid setup loads in our analysis, because, here we don’t have any monthly electricity bills where we can just facilitate the monthly power consumption and divide it by 30 days. We’ll take a different approach for the load analysis for the upgrade setup. Step number two would be the sizing of the solar PV panels. Step number three will be the sizing of the battery bank. In step four we’ll size our upgrade inverter, and in step five, we will size our solar charge controller.

So, for the load analysis for an off-grid setup, it’s quite different here. You need to list down all the electrical equipment in your inside your house, and for this example, suppose we have led lights, led tv, electric fans, a fridge, a laptop, a washing machine. After you have listed down the equipment, the next step is to list down their individual power consumption. You can find this information on the packaging, or on the label at the back of your equipment.

In this example, the led lights consume around 9 watts, the led tv around 80 watts, the fan around 65 watts, the fridge is around 250 watts, the laptop 80 watts, and the washing machine around 250 watts. So, the next one, after you have listed down the unit power, list down their quantities. So, for example, we have four led lights, one led tv, two fans, one fridge, one laptop, and one washing machine. The next step is to multiply the unit power, you need this unit power by the quantity to get the total power consumption for each type of equipment. Then, next is we list down the duration at which this equipment will be used. So, for example, the led lights are to be used only at night, so we’ll assume that will be around seven hours, led tv for five hours, the fans for eight hours, each the fridge for 10 hours.

You can use our Energy Calculator to calculate your consumption.

There’s a question here, why not 24 hours for the fridge, and the reason being is that because, once it reaches a certain temperature, set by the user, it won’t use as much power to maintain this temperature, that’s why we have only listed 10 hours operation time for the fridge. So, laptop around four hours, and washing machine two hours to do the laundry each day.

Okay, next one, we will multiply this total power by the duration, and we have the daily consumption for each type of equipment, then we sum this all up and that will be the approximate daily consumption of our equipment. So, for this example, we have around 5 kilowatts of power consumption per day.

2. The sizing of the solar PV panels

The next step is sizing solar PV powers. So now, that we have calculated how much power we can consume daily, you will also need to determine how much sun is your location getting, or what we call the sun peak hours. The sun peak hours is the duration at which the intensity of sunlight is at 1,000 watts per square meter. So, the average sun peak hours is usually around four to five hours, and that value varies as you move away from the equator.

There are locations where they have longer days, and some will have longer nights. This piece of information, you will have to do by yourself. You have to just google it, but if you just wanted to do some estimation, you could probably use four hours or five hours. That should be quite enough. So, to compete for the required capacity of our solar panel panels, we should divide the daily consumption by the sun some peak hours, and multiply by 1.3.

So, that’s around 5 kilowatts divided by five hours, multiplied by 1.3 So, the required PV power is around 1.3 kilowatts. Now, suppose we have a solar panel in mind, one of them is this panel right here with a power rating of 380 watts. Well, to compute how many of this type of solar panels you need for this installation, you just need to divide the required solar PV power which is 1.3 kilowatts, and divided by the solar panel rating which is 380 watts. So, we have 3.4 or round it up, we will need four of this 380 watts solar panel.

3. The sizing of the battery bank

Step number three in the Off-Grid Solar Power System will be sizing the battery bank. So, the battery bank capacity depends on four factors, namely the daily consumption, daily power consumption, the depth of discharge, or DoD of the battery, the efficiency of the battery, lastly the system voltage. The depth of this charge, DOD is the allowable level at which you can drain your batteries. So over-discharging your batteries beyond the DOD can shorten. It’s slice lifespan.

The system voltage is purely the owner’s choice, but that’s a guide, a 12 volts system is most suitable for small installations, around 1200 watts and below the 24. A 24 volts system is for medium size installations between 1200 watts to 2400 watts, and the 48 volts installation is for larger systems, above 2,400 watts. Please do know that a 12-volt system will draw more current as it needs to compensate for its lower voltage. So, higher current means you need to provide thicker cables, and cables really aren’t cheap.

In this example, we will use a 48 volts system. Suppose we have a battery with a 12 volts output, a battery capacity rating of 250 ampere-hours, a VoD of 50, and an efficiency of 85 percent. Now, to compete for the required battery capacity, the daily power consumption is divided by the product of the battery’s depth of discharge, efficiency, and system voltage. So that will be 5 kilowatts hours divided by 0.5 times 0.85, and times 48 volts. So, the required battery bank capacity would be around 245.69 ampere-hours.

Step four, sizing our inverter. So, for an off-grid inverter, it is important to take into consideration, the search power generated by the load. So, for this let us make a table similar to our load analysis. But instead of listing down the duration of operation, we will replace this with a multiplier for motor loads, such as the fan, the fridge, and the washing machine. We will multiply its power by two or three. For lighter loads, such as the led light, the multiplier would be 1.3. Search power is the sudden or the sudden increase in power when you switch on your appliances, especially, your water loads.

In this example, we have assigned the fridge and washing machine with a multiplier of three. For the fan which is a bit smaller than the washing machine, we assign a multiplier of two, and for the rest of the load, we can assign 1.3. So, next is we multiply the total power by the multiplier. We have total power here considering the surge power, we sum this all up, and this will now be the minimum power rating of our upgrade inverter.

5. The sizing of the solar charge controller

This one is okay to calculate for the number of solar panel series connections divide the V max which is 200 volts by the open-circuit voltage of the solar panel which is 48.8 volts result. Now, would be four. So, we need four pieces of this solar panel of solar panel connected in series.

You can watch the video below for a better understanding.