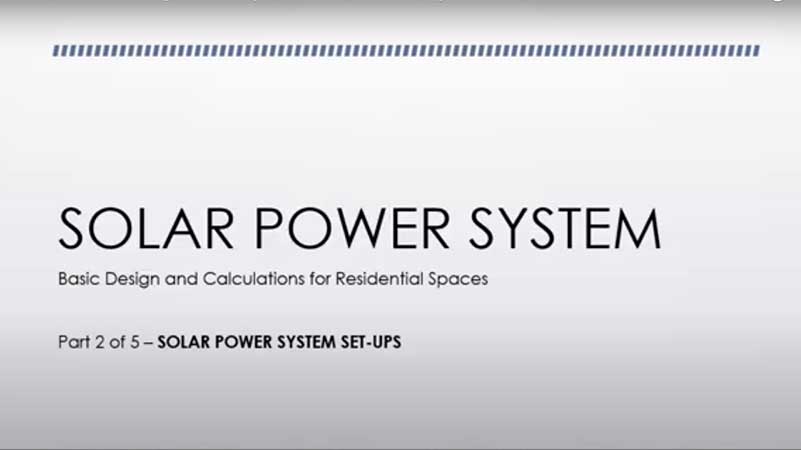 The first type of setup is the on-grid system. It is the most common type of setup, due to its simplicity. It is also the cheapest to set up, and it has the fastest ROI or return of investment. As you are able to export your excess power back to the grid, you also don’t need a battery back, but the catch is, you still need to connect your system to the power grid. This is not applicable for remote areas here, in case of a power disruption, you won’t have power as well.

The reason being is that during blackouts, you should not be exporting power to the grid as the repairman from your Electric Company might get electrocuted.

The second type of solar power system is the off-grid system. The off-grid system is typically installed in remote areas, where there is not a power grid nearby. This setup requires a battery bank to store, the harvested solar energy during the day for use during the night, or on days where it is very cloudy, and the amount of sunlight is not enough to power.

The third type of setup is called the hybrid system, and it combines the characteristics of both the on-grid and off-grid systems, and this setup requires a battery bank and is also connected to the power grid. The battery bank may provide the full power as your appliances demand, or let me just provide power to some of your appliances during the night, or during blackouts.

The grid connects connection will function as your reserve or backup source of power. So, let’s take a closer, look at the Android system. The on-grid system is the simplest, and the cheapest to install. As it only requires two main components, the solar panels, and the ungraded inverter. As mentioned, the off-grid system is still connected to the power grid, the utility, if the load power requirement is too high, it will import power from the grid, and if the solar power system generates excess power, it will export this power back to the grid, and the tariffs will be paid to you.

Assuming that you have applied for net metering, the downside on-grid system is that, it is not able to function during the blackout for safety reasons. So, if there is a power disruption IO, also you will not help power the off-grid system, unlike the off-grid system which relies on power, or the power grid to operate.

The operating system is totally independent of the grid, that is why it is mainly installed in remote locations. The good thing about the off-grid system is that it can provide you with power 24 hours a day and if properly designed based on your load. The cons of installing an off-grid system are that, it is expensive as it requires four components, will be solar panels, the solar charge controller, or the SDC. We also have the battery bank and the off-grid inverter.

Growatt 6000 W Complete Off-Grid Solar Kit
MSRP Price: $7,399.00
Your Price: $6,409.00
Looking for a complete off-grid solar kit that’s simple to set up & install, comes with lithium batteries, and has the ability to hook up to solar, wind, fuel/backup generator, and/or utility power? Look no further!
Buy Product
View On Store

The battery bank itself is expensive and has a lifespan of only three to five years. The hybrid system combines the best features of both the D on-grid system and the off-grid system. So, during the day, the solar panels can provide electricity to the load while charging the batteries at night.

The stored energy in the batteries will take over, and if the battery bank runs out of power the grid, the utility will take over. So, just like the off-grid system, setting up a hybrid system will also be very expensive.

This kind of setup requires four major components; one is the solar panels or your solar array, next is the hybrid inverter, next we’ll have the battery bank, and lastly, you will have your automatic transfer switch or ATS. It will let you switch between your normal power source.

Off-Grid Solar Battery System – In this case, that will be your solar power system, and your reserve, or your backup power source which will be your power grid, or the utility well as I have mentioned previously. The upgrade batteries are expensive, and they have a short lifespan of around three to five years.