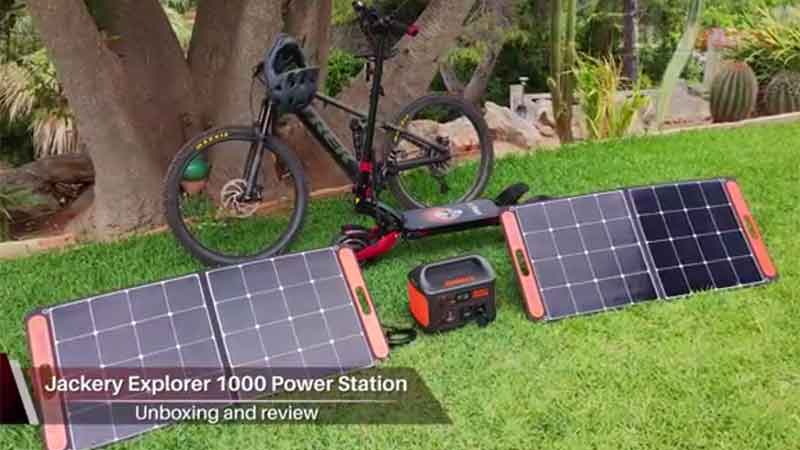 Jackery Explorer 1000 Testing – This is the Jackery Explorer 1000. It is a power station with a 1002 watt-hour capacity, 1000 watt maximum output. As you can see, it has 2 AC power points right here. This is the EU version, obviously, we do have quite a few DC plugs there as well, including a car port there with 12 volts up to 10 amps.

Now, in this in-depth review, I will be checking out this in detail. We’ll take a look at what you can really use it for obviously. This is something that’s really ideal, I think for people that are campers, but you could also use it for an emergency power source. You could use it for example what I’m doing at the moment, charging my e-bikes, or e-scooters, and if you wanted to keep things green and use the solar panels, you can charge it up with that. I’ll be testing with the explorer 1000.

Included inside the box, you will find a user manual. We have a warranty card. Now, they do give us this which is a free gift, apparently with them, and that is a cable here, an adapter, so you can connect up two solar panels to charge it at the maximum of 180 watts. There is also this pouch included.

Now, inside this, you will find our power supply, the car adapter. Okay, so the power supply, this one is rated to 1800 watts maximum. It’s a hunt key that’s a known brand. I’ve seen many of these power supplies normally, powering laptops and mini PCs. So, the charge time with this charger is 7.5 hours. There is a cable here for our car charger. So, car charging that is going to take then 7.5 hours for alternator charging, and there is an EU power cable for my EU model here.

I have the explorer 1000 here, has an excellent build quality to it. They’ve used ABS style plastics. We have a big handle here at the top, and that means, that it’s very easy to pick this up as well. Now, weighs 22 pounds which are approximately 10 kilos. So, it is a little heavy.

Now, there are no sharp edges with these plastics. Everything seems to be very good, some solid, rubber feet on the bottom. So, we have an air intake and exit vent too, they have a little tiny fan in here that you barely hear only when it’s under really full load, you hear the fans come on within this.

There is a spotlight right here which is very handy to have. I’ve seen in other battery packs, you just tap it that’s simple ON and OFF, and if you tap and hold it then does an S.O.S flashing which is good for camping, if you ever needed that, or in a disaster situation.

Now, the back of it here, you can see that there is nothing. Okay, that’s again some very strong plastic, and then on this side which is the right here, we just have another exit or intake vent there for the fan that’s inside cooling everything up here at the top. We have our import here, so this is a 180 watts maximum with the adapter to charge it, and then input here for solar.

If you’re going to use that adapter they have, you can use two of the solar saga 100 watts solar panels to get them a maximum of 180 watts, even though on the display here. If you tap it, this will come ON, it will stay on for 15 seconds. It was only reading about 100 watts or 120 watts maximum with the solar of the two panels, but later on, it charged very quickly in about 8 hours. So, it was actually running at about 180 watts which is good to know with that.

So, there’s a button right here to turn on our DC side of things, and AC. So, 100 watts max here with both of these, and this being the EU version. We just get the two sockets, the US version, I believe has three here, and up to 2,000 watts surge. That surge though, you shouldn’t exceed 1000 watts. If you do exceed it after a while, it will cut out. The search time is only just a brief window there, that it has, they can do that surge, of course.

So, with DC here, we’ve got type C which this one here is 18 watts maximum. So, it’s power delivery supporting, but it’s the only power delivery. The first spec, so I would have liked to see power delivery 2 and up to 65 watts would have been good like some of the competitors out there. We’ve got another type C port here, so two of them which is good to have. But, this one here is just rated to 5 volts 2.4 amps, and then Qualcomm for our type A here that’s a maximum of 18 volts as well for Qualcomm’s quick charge three.  And then we do have a car jack here. This one is 12 volts 10 amps which are not bad.

So, I have my meter plugged in, as you can see, I just wanted to see if it’s quite accurate the meter that they have. Now, straight away, just turning on AC, you’ll lose about 8 to 10 watts here, and that is pretty much normal. I have a hairdryer plugged in, so a very demanding appliance, just turn this ON to the first level.

So, you’re looking around 133 watts here, according to my meter, and this is telling me 130 to 150. It really a little bit off, as you can see, by about 20 watts. Now, I’m going to step it up. So, that’s fine up to around 300 watts, the fans come on. So, when you start to use something, that’s a little bit demanding and appliance, and especially with the AC on, you’ll hear the fan. I’ll give you a sample of what the fan sounds like.

This is one of the cons of such a power station is they do make a bit of noise when they’re working hard. Of course, those fans need to keep the internals cool, and that’s really about as loud as it is going to get. So, what I’ll do now is, I’m going to really ramp it up. It’ll probably go over a thousand watts, and it will probably end up cutting itself out. Let’s have a look, around 1200 almost 1300 watts, and it did not cut out.

Now, if I was to go up to 2000 which I’ll do now, briefly, it will cut off the AC, and it might even power itself off. Now, that’s a safety built-in, a safety mechanism that it has. So, let’s test it out.

You can watch all tests in the video below.

Jackery Explorer 1000 Testing – So, all up the Jackery Explorer here, I think is a very decent great power station, good capacity, 100 watts max. I think, it’s plenty of power for most people’s normal kind of needs, and it’s gonna be perfect and great for people that will be going camping, or as a backup battery, just to run a few little things around the place if you do have a lot of power cuts and things like that.