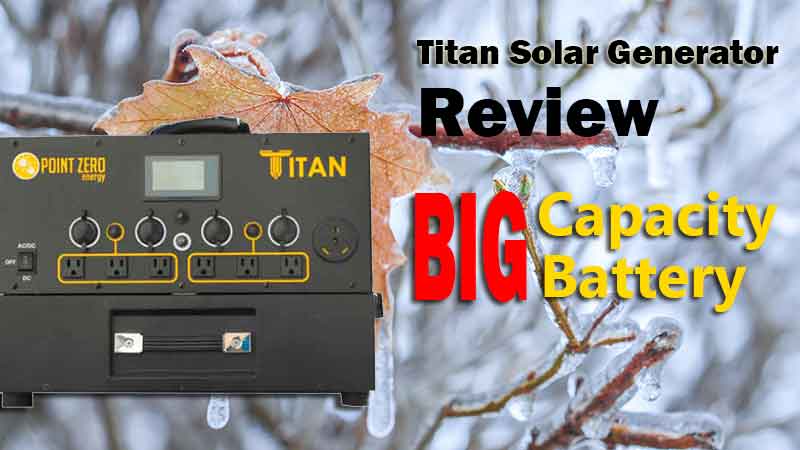 Titan Solar Generator Review – Today, we have the Titan solar generator which is a probably well-known solar generator. This one’s probably one of the main, it’s one of the largest ones out there, and it’s relatively new. I don’t remember exactly when this came out, but it’s probably a couple of years old, my guess.

Let’s go over the first part of this review which is the specification on the outside. So, I’m gonna go ahead and share with you a couple of screenshots from point zero Energy’s manual that’s the company that makes the Titan. We’ll start with the front view.  So, in the front view, we have the battery display which shows several different factors, and basically, what it gives you is everything you need to know.

In regards to your battery, how much solar input, you have how much battery is left, all that stuff you could see that they have on that LCD screen. Next, we have the AC ports. So, we have 6 AC ports which are awesome, you could power a ton of things with that, and that’s probably one of the most significant features of this is 6 AC ports. Above that, you could see the 4 circles, the 12 volt DC sockets, and 20 amps max for each one.

Then you have the RV port which is pretty awesome, that’s relatively rare when it comes to solar generators. So, that’s really nice to have, especially for people who own a camper, or an RV, and use that plug. That’s pretty much the majority of what’s on this side, there’s obviously more details, but the other main factor that I can see from this display. This diagram here is the bottom part which is labeled J and that is the battery.

So, that’s a lithium battery. It’s 2000 watt-hours, it has a lot of capabilities. I’ll get into those in a second, but what’s awesome about this is that you can stack these batteries above each other, and basically go nuts if you want to and just have a ton of batteries underneath that. That’s really impressive to see, and I see this being a trend in the future, for one reason energy a well-respected company that made the apex in the Kodiak has already taken this idea and made it their own with the energy flex which is currently on pre-order.

That’s pre-order right now. They just came out with it but they pretty much copied what the Titan is all about, and that’s stacking batteries having a massive power output and putting both of those into one and that’s really impressive to see. I definitely see this being a trend in the future for all solar generators next year.

We’ll go to the side view, and we could see that there’s an external battery port. This is also where the solar input goes and also to charge your battery, you have it there from the wall. There’s the connector there, and one really impressive feature of this is that with two or more batteries, you can have 2,000 watts of solar input which is really good, and that’s the best I’ve ever reviewed out of all the generators that I have reviewed.

Also, it’s probably the best out of all solar generators current-day, and that’s just amazing, it allows to charge up extremely fast. So, it really makes it a usable solution for people in their RVs, and homes, and off-grid cabins. But, it really allows people to use more power off-grid, and especially if needed, so if the power goes out, then you have this, and it can power a lot of things, not just your fridge, but several other things depending on how many batteries you have as well. And if there’s a lot of sunlight to recharge it.

So, all those factors aside, it’s still a great system, and so let’s go ahead and get into the internal features a little more. I already talked about the solar input, but the battery is a 2000 watt-hour battery, and that’s per battery pack. You can get it in different kits where it comes with 2, or 3, or you can buy as many as you really want. I don’t know that if there’s a limit to how many batteries you can attach to this thing. So, I mean you could really just like I said earlier, you’d go crazy with it.

But some other features I forgot to mention earlier, there’s a lot of USB ports. There are 6 smart USB ports, and then 2 USB-C ports with that. And it says that the 2 USB-C ports are removable sockets, so there you have it, you could charge your smartphones, tablets, anything like that with the USB.

Now, one of the more impressive features here within the battery is that it has a continuous power output of 3000 watts. So,  they recommend 1500 watts continuous with one battery pack, but if you have 2 or more battery packs, you can go up to 3000 watts of continuous power and up to 6,000 watts of peak power output. That’s the best I’ve seen once again, and that means you could power so many things with this, even the most power-intensive items.  You can power with it.

Now, for how long, I’m not exactly sure you have to do the math on that, but this is very impressive, and you can use this generator with a lot of things, a lot of appliances things like that. So, the battery type is lithium-ion, and the life of this battery is up to ten years or up to 2,000 cycles. That’s awesome. The energy apex and I believe the Kodiak had a 2000 battery life cycle battery, and that was the best, and it still outdoes goal zero. Goal zero most of their generators are 5500 life cycles, and I mean you get four times that with not only the Titan but also the energy generators that I was mentioning earlier.