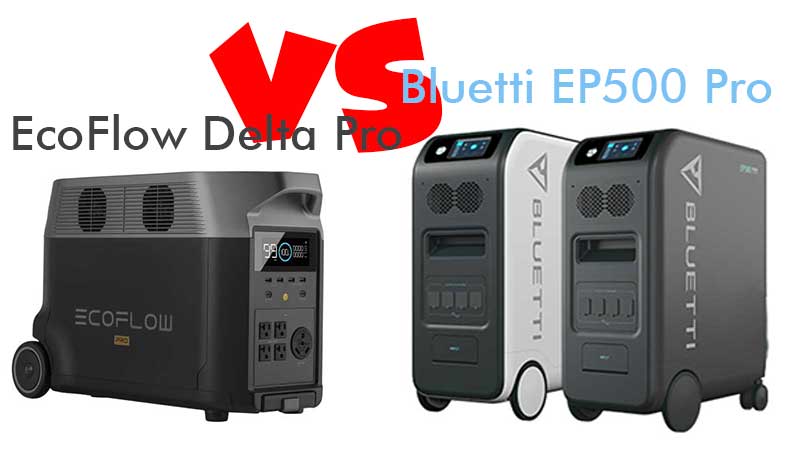 EcoFlow Delta Pro VS Bluetti EP500 – Portable solar battery packs have been around for many years. There are a lot of companies that make them for emergency use, camping, and then just generally power on the go. These portable units are often referred to as solar generators, because of their ability to provide energy, and you can simply plug your tools appliances, and other devices directly into them.

Until now, most portable solar generators have had a capacity between a couple of hundred watts for the smaller ones, and the larger models had a capacity between 1500 and 2000 watts. Now, this is enough energy to power up your electronics, your lighting, some power tools, some small kitchen appliances,  your refrigerator for a short amount of time.

They have proven to be very useful during short intermittent power interruptions, or for providing limited power to off-grid camping. But the solar generator war is heating up, and there are some incredible products that would be launched very soon that offer a lot more power. I’m talking about the Bluetti EP500.

The EP500 Pro and EcoFlow Delta Pro, these two companies have significantly improved their solar technologies, and now offer a solution for long-term off-grid scenarios. Let’s take a closer look at these two companies, and these three new products now, because they are brand new generators, I don’t yet have one to be able to test and review.

Both companies have an outstanding history with quality and customer service. And I’m sure, they’re not going to disappoint us. Now, I have been in contact with both companies, and I have scoured the internet searching for the specs. And that has been publicly released, and so I’m going to compare those side by side.

Now, Bluetti is a couple of months ahead in the development of the EP500 and EP500 Pro. In fact, they just entered the production stage while the Delta Pro is still being tested. That’s why if you search the internet you’re going to start seeing demonstration videos for the Bluetti models, but nothing yet really for the Delta Pro.

EcoFlow Delta Pro has a huge expandable capacity that you can customize to meet your energy needs. With two Smart Extra Batteries, you can increase your capacity to a whopping 10.8kWh. And for the first time ever, you can power your home for days with an incredible 25 kWh capacity.

A single DELTA Pro unit offers an AC output up to 3600W, which can be expanded up to 4500W with X-Boost. This allows you to power window air conditioners, washing machines, and other devices.

Now, in full disclosure, because the Delta Pro is still in testing some of the specs and features that we’re going to discuss could change slightly in the final production model. The specs for the Bluetti are for their model that is currently in production, but even so, some of the information I have found is a little conflicting.

Now, let’s compare what we do know and let’s jump on the computer, and I’ll show these two products side by side.

Okay, before we go, there’s some additional information here that came out that I want to share with you. Both of these companies are going to have some type of sub-panel that allows you to tie this into your main home panel box for emergency backup power. So, that is going to be an option.

I hope you enjoyed this side-by-side look at both the Bluetti models and also the EcoFlow Delta Pro models, which one would you buy right now. For me personally, I’m looking real hard at the EcoFlow Delta Pro, and that’s probably what’s going to end up in my home, just because of the portability factor of it, and some of the features.

It’s just a little bit different than the other two, and I really like the idea that I’m going to be able to expand and make that much bigger unit to be able to power my home for several days.

EcoFlow Delta Pro
MSRP Price: $3,599.00
EcoFLow Delta Pro has a huge expandable capacity that you can customize to meet your energy needs. With two Smart Extra Batteries, you can increase your capacity to a whopping 10.8kWh.
Buy Product