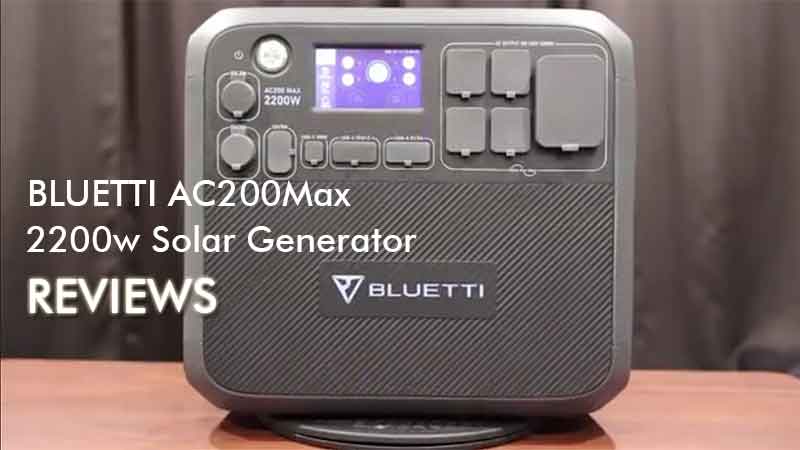 BLUETTI AC200Max 2200w Solar Generator With B230 LiFePO4 Modular Battery – Introducing the new Bluetti ac200 max. This solar power station is an upgrade from the current Bluetti AC200P. It has the same 3500 cycles, 2048 watt-hour, lithium iron phosphate battery, but with many upgraded features including a new 2200 watt pure sine inverter, a 30 amp RV hookup modular battery support, and mobile app control for both android and apple.

It has an MPPT solar controller built-in that can handle a whopping 1400 watts of solar and can charge in as little as 2 hours. Now, let’s take a closer, look at this 62-pound solar generator, a lot of new upgrades over the AC200P, such as the ability to finally charge from a single solar panel. I know that was the bane of the existence of many of you out there who had the AC200P.

1. The ability to send solar

This means is, if you max out the solar on the max, you can max out the charge in under 2 hours max. They finally added a pair of 18 watts quick charge ports that replace the dummy 5 volts regular USB ports that they had on the AC200P. They also bumped up the 60 watts power delivery port to a 100 watts power delivery port, good for DC charging, a MacBook, or another high-end laptop.

DC charging is by far the best way to charge your devices because it doesn’t waste a lot of power as AC does. Of course, the AC200 max still has the 20 amp 120 volts outputs, but finally adds the coveted 30 amp RV port, which means you can finally hook your van, RV trailer, or 30 amp motor home, right here into the Bluetti without using any adapters, and after loads of requests, Bluetti has finally added mobile app control to their products just like they have for the EP500.

Now, I’ve only used the app, so far the updated the firmware on this but I will cover the app in more detail in a separate article.

Of course, one of the biggest changes is the addition of these new external 2000 watt-hour battery packs. Many of you wanted to expand the power of your Bluetti officially without screwing a bunch of used laptop batteries together. In a workshop, the b230 battery packs are more than just external batteries.  They actually offer their own outputs.

You have a 12 volt regulated output a 100 watts power delivery USB port, and 18 watts quick charge USB ports. And you can charge these individuals with their own chargers, or plug them into the AC200 max,  and charge them all together. Since you’re gonna run up to two of these with your AC200 max, this gives you far more higher-powered outputs than the competition.

BLUETTI AC200Max 2200w – Well, first, this is called innovation. Apple comes out with a new phone every year. You should expect any successful tech company is going to be updating its product line at least once a year. So honestly, I don’t know how they do it, I’m starting to think they have some former Tesla employees, or something working for them.

Because they are really firing out these new products, left and right anyway, owners of the now Triassic AC200 and Jurassic AC200P grab a hanky and dry away those salty tears, because I have some kick-ass news for you, and that is that the B230 external two-kilowatt battery pack is in fact, backward compatible with your old models.

So, you can expand your battery on both the AC200 and AC200P. They were released way back in 2020 and 2021 respectively. I’ll go into a lot more detail and typical testing when the AC200 Max is available for retail pre-order.