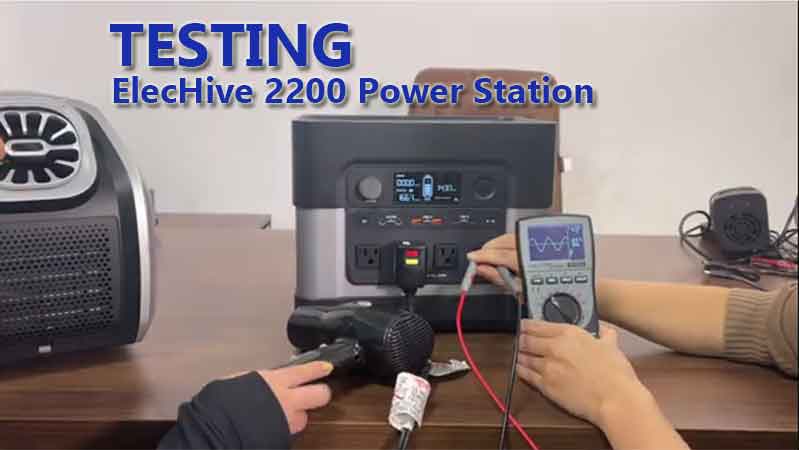 Okay, today we’re going to use a load tester to show you the ac output and run a test on this. So, let’s turn the unit on, and we’re going to plug into the DC5521 port, and it has the rate of 10 amps output, and without any load. Let’s turn the ac up without any load, it should be 13.3 volts. Now, let’s increase some load, you can see the fan is running, and it’s increasing, and then you can see on the display screen. It’s about the output is 130 watts increasing.

Now, you can see that the output is 10 amps right now, and it’s still running normal and stable unless increasing some more and it’s got to 11 amps. And you see, the little warning screen, warning sign coming out, and then the unit now went into overload protection, and shut off. So, let’s get everything back to normal, and turn the unit back on. Okay, now everything went back to zero, and then you can see that it’s without any load, it’s 13.3 volts again.  So, when we went to 11 amps, the unit went into overload protection.

Okay next, let’s plug the plug into the cigarette lighter port, and I just want to point out, the dust cover they have improved that as well. It’s not coming off, but I think the final product will be more detailed, and with better materials as well. Okay, let’s plug it in, and then plug it into the load tester, you can turn the DC port on, and you can see this one is without any load is at 13.1 volts right now, and I think this one has the output of 15 amps.

Let’s get everything back to normal, and see if it would run again. Turn the DC put on, okay, it’s back to regulated at 13.1 volts. It’s increased again. So, as you can see, after winter overload protection, and when we restart it and turn it back on, it’s running normal and no problem, very stable.

ElecHive Portable 2500 Wh
Price: $1,899.00
Its powerful battery can provide 2,200W of power output, just like a standard wall socket! And it packs a massive 2,500Wh capacity, which means all your devices will stay powered for hours and hours
Buy Product
View On Store

Next, we’re going to show you the USB ports. So, you’re going to use the load tester, and I believe these two USB-A ports are QC 3.0 and you can see the voltage, and I think it goes from 3.3 to all the way to 12 volts. Okay, it’s at 12 volts now. Let’s do some testing on the USB-c ports. So now, we have one plugged into the type c port, and I believe these two USB type C4S. One is 18 watts, and this one is the PD 60 watts.  And let’s see.

Now, we’re going to show you the improvements they have made on all four AC outputs. I believe the AC output socket now supports up to 20 amps, I believe it was 10 amps before. They have also increased the output to 120 volts inside 110. we plug into this hairdryer in the one of AC socket right now and turn on the AC switch, and then we’re gonna turn the hairdryer on, and you can see on the display screen on this,  it’s showing close to 120 volts, like 119.5, okay turn it off.