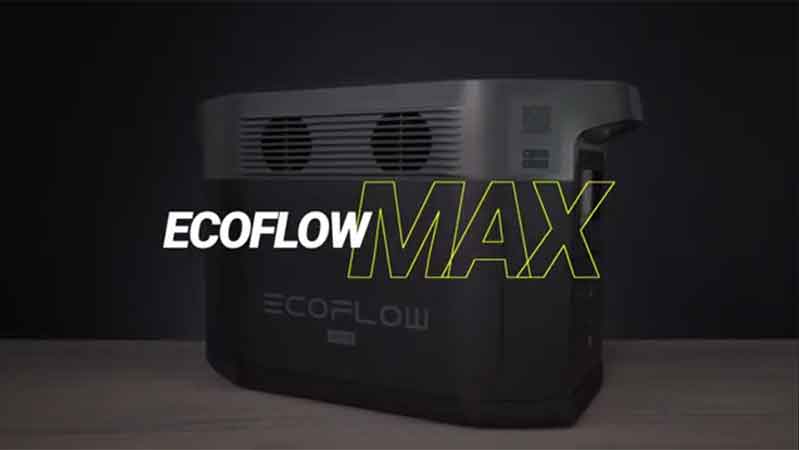 EcoFlow DELTA Max VS Pro – So, for the past few years, now, I’ve really enjoyed using external batteries, not only just being in the field with them, but also here at home as more of an emergency backup. I’ve reviewed and tested a bunch of different types of portable batteries for the past year. Now, I’ve been learning and using this one. This is the EcoFlow Delta and the main reason why I’ve been using this one so much is, because of the fact that it’s easy to transport, easy to carry around, and I know it might not seem that big of a deal, but you’d be surprised on some of the other battery packs out there.

This one actually does give you a straight number of how much is remaining, some of the other chargers out there give you like a bar, like how many bars are left, and at that point, you don’t really know exactly where you are. And it’s not even just the UI, of course, these are one of the fastest charging portable power solutions on the market. So, super excited when EcoFlow reached out to me to test out the new EcoFlow Max.

EcoFlow DELTA Max VS Pro – And they actually have two, there’s two, new ones on Kickstarter before, where this one actually started on Kickstarter a few years ago. But they do have two, new ones which are right here the Max, as well as an even bigger solution called the EcoFlow Pro. And the main difference between the Pro and the Max, this max is really a bumped up version of the original Delta does, have a lot higher specs, and the new Pro is more geared towards a full home solution that you would actually plug into your home network, your home power.  So, if you did have a full blackout, look at it as more of a home solution backup. That is also still portable.

Now, the main reason why I kind of got into just looking at battery backup solutions, I’m here in San Diego in California, and we have a lot of blackouts, a lot of rolling brownouts in California during especially the hot summer days, and there are definitely a few times last year when that did happen, and sometimes it’d be only for 30 minutes, sometimes it would be for up to two to four hours.

So, that was the main reason why a few years ago or a couple of years ago, I started looking into having backup solutions, mainly for those reasons. What’s gonna happen if we do have to do some of those rolling blackouts, and every time we hit the road, I would normally always carry around a battery backup with me. A battery solution just for emergency purposes, and also when I’m out in the field, flying drones using my camera, I’d always want to have some sort of battery backup. So, I’m able to power everything on the go.

Now, before I jump into my experience using the EcoFlow Max for the past few weeks, let’s first talk about the specs of this new battery. As far as capacity on the EcoFlow Max, we’re talking 2016 watt-hours. Now, in comparison to the Delta, the Delta is actually 1,260 watt-hours. This one definitely a big upgrade with the Max. Now, one of the biggest differences with the EcoFlow Max as well as the new Pro is that you are now able to expand these battery solutions out.

If you wanted to get one or two more extra battery banks, you’re able to do that here and plug them directly onto the side, and these are something you weren’t able to do with the original Delta. The one that I do like is their interface on their battery solutions, and they actually are all the same. So, you don’t have inconsistency throughout their batteries. They’re all the same to show you how much percentage you have left, which I really like.

As I said, some of the other companies just use the bars to tell you how much, and they don’t even give you a regular number. You’re also able to see how much watts input as well as outputs on the right-hand side, and of course, depending on what’s plugged in, you have the number of hours remaining for whatever’s plugged into it. So, it gives you a little countdown of how much longer you have based on how much power is going out.

The one thing I do like about the new Max and the Pro is that they do have a wi-fi feature. EcoFlow actually has its own app which the interface is actually really nice. I mean as a designer, I’m really impressed with just the look and feel of this actual device itself, and also the interface on their app. So, you’re able to monitor the health, you’re able to change a lot of the settings on there, depending on how much you want charging, all that stuff can be monitored on the actual mobile app.

As far as USB goes, we do have the standard USB-A. We have two ports there. We also have two more USB-A fast-charge ports. We have two USB-c down here, 100 watts as well as on the side. Right there, so two USB-C ports. I’m gonna flip it around to the backside, we do have six outlets on the very back which can total up to 2,400 watts at the very bottom. We do have a car charger port, and at the very top, this is where you’re going to be powering up your EcoFlow Max.

Now, to charge it up, you can actually plug it in, of course right to your wall outlet. and there’s actually a switch on the side and there’s it says fast, and then it also says adjust now at first I was like. Okay, I wanted always want to charge it up as fast as possible. I first kept it at fast, I didn’t realize it was charging so fast that it actually tripped my power outlets. Because it was powering it so much like it actually hit the breaker.

So, you can actually dial that down by going to adjust opening up the app, and then you can now tell it, how much you want as far as input goes. When you’re charging this up, crazy to think this huge battery, you’re gonna charge it from zero to eighty percent in a little over an hour, and a full charge in about two hours. Some of the other battery solutions I have that are about the same size take about 8 to 10 to 12 hours to charge.

So, that fast charge on here is something that you don’t really see on too many other battery solutions. Now, when everyone gets these battery packs, they always want to know how much can power? what can it power? To be honest with you, this will pretty much power almost everything in your house, depending on what appliances I was using. When I was testing out the Delta, I would trip it up, I would go over its threshold when I would try to max it out using all the things that normally produce heat.  So, if you’re trying to use a toaster, oven, hairdryer, space heater, those are things that use up the most energy. Those are the ones I would always want to test.

EcoFlow DELTA Max
Price: $2,099.00
A single DELTA Max unit offers an AC output up to 2400W, which can be expanded up to 4500W with X-Boost. This allows you to power window air conditioners, washing machines, and other devices.
Buy Product
View On Store

First, just to see is it able to power those devices up, now for me the only thing the Max wouldn’t power is my dryer. My clothes dryer requires a 240. This one does not have a 240 plug on it. If you wanted to power something that large, you’re going to need to jump up to the new EcoFlow Pro, but you’ll also need to have a separate, or second battery in order for you to power up something that large.

Now, with that said one of the things, I wanted to test this thing on. And like I mentioned earlier when you do have a blackout, one of the main things that go out is your refrigerator, I wanted to see how long this would power up a full-size fridge. So, one of those tests, I hooked up my fridge to it, a full-size fridge, just wanted to see kind of general how long it would take, and of course, you know throughout the day I would use the fridge as I normally would.

You’ll see, it spikes when the compressors turn on. You’ll see, it takes a lot more energy than it starts, dipping back down to about 100 watts of usage. But overall, I was testing it for about 12 hours, it powered it up, and then based on my battery, it still said I had a couple of hours left. So, I was able to go pretty much 12. It’ll probably last maybe 12 – 14, maybe 16 hours for powering up a full-size fridge off of this Mac.

Now, if you’re just worried about powering up devices, phones, laptops, things like that while you’re in the field, absolutely, more than enough that you’ll need with something this big. As far as weight goes, this is actually 48 pounds, the Delta is 30 pounds. But, luckily enough, the way they designed it, has been handled. So, you’re able to lift it up, and it’s still very portable. If you wanted to bring this with you, I actually just brought it out with us camping for a couple of days.

What’s funny is, that even though I hooked up a bunch of things to it, all those smaller types of gears and batteries don’t really use up that much power. We powered everything off of these things for about a day and a half. And at the end of that day and a half, I still had a little bit over 80 percent, just powering up drone batteries, phones, tablets, we had night lights hooked up everything to it.

So, just that pretty much a day of use, I still had 80 plus percent on it. Those are some of the things that you just don’t know how much you’re going to use, but when you do have a larger pack, you just feel a lot more comfortable out there that you have enough energy to last those few days.