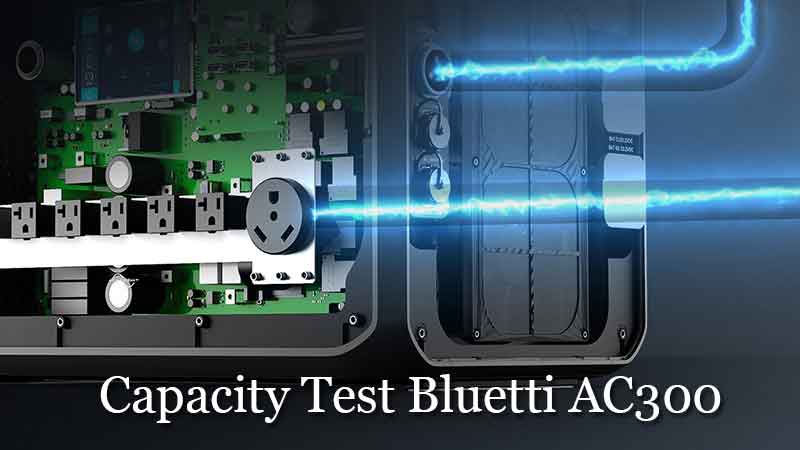 Capacity Test Bluetti AC300 – Tom from HoboTech said that he only pulled 72 percent of these batteries rated capacity. So, right now, I’m discharging this thing down to zero, and I disconnected the solar. And once it’s at zero, we’re going to see how much power it takes to charge up, and then we’re going to do a capacity test.

So, hopefully, I get good results. But I’m pretty sure that I’m probably going to get the same results as everybody else. So, running a battery charger and a heat gun, we’re pulling 2,700 watts all the way until it’s at zero. I’m a little salty that this thing is not working well. Because I actually really like this unit. So, we just got a low voltage disconnect, and we are at a zero percent state of charge.

Now, we’re going to charge it with the AC charger in a wattmeter. We’re going to measure how many kilowatt-hours it takes to recharge both batteries. We’re charging with 12 amps which is like 0.4 or 0.5 C. So, we’ll come back in about five hours when this thing is done charging, and see what our results are, and just to show you the meter is zeroed out.

Now, both batteries are fully charged and it took 7.08 kilowatt-hours to charge. These two batteries dividing this number by the total capacity. We get an efficiency of 86 percent which is not that great. I actually have a battery charger next to me (EG4 battery 48v charger), right now that pulls 95 to 98 efficiency which is this one right here 95, and sometimes you can get even higher when you test it.

So, let’s do a capacity test now. Now, we’re pulling 1,200 watts out. This is pretty much a 0.5 C-test perfectly. We’ll come back in 5 hours and see what our results are. This rain all day, and the test is finally done. This model has a memory, it actually stored it right there 5.37 that’s actually pulled 87 of its rated capacity for this capacity test. Maybe the other was talking about round-trip efficiency because this is a very typical figure.

I used two and we were discharged at practically the same C rate and I never updated the firmware. This is just how I got it. Well, I pulled 87 from mine, and I practically pulled almost the same as my full-size system. So, I don’t know some people will try to criticize these power meters. These, my shunts over there, are practically the same accuracy as my cba4 system with amplifier. People try to critique power meters, but these are down to like 0.1 watts, or something of accuracy.

So, when you’re testing large batteries with something as accurate as this, you don’t really have to get mad at this, and the figures I got are exactly what I would expect for this unit. Anyways, I guess I got lucky with this unit because I haven’t had any issues. I pulled nearly full capacity, and I would expect those efficiency results for this type of unit, 87 is fine for an inverter. If it was 80, then I would comment on it. But I don’t know why he got such bad results, maybe there was something wrong with it. I have no idea because you can check the cell voltages, and I haven’t heard of anybody not pulling full capacity with a Bluetti unit.