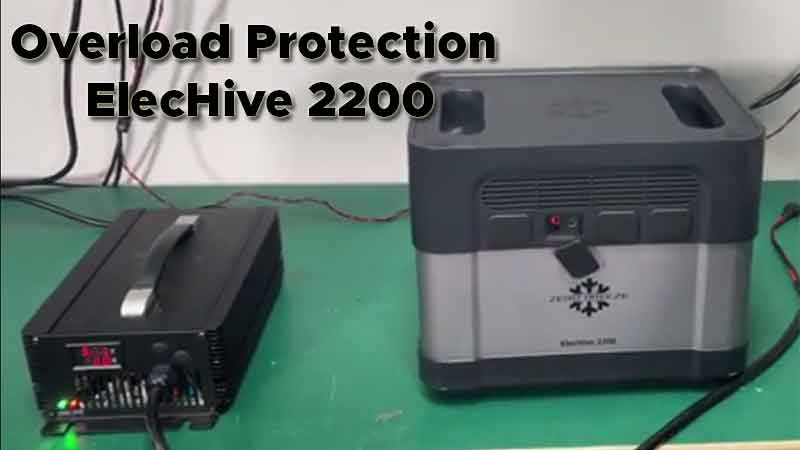 Overload Protection ElecHive 2200 – Today, we’re gonna show you two things. The first thing is the fast charging function you have been waiting for and I know you are excited about it, and another thing we want to show you is the AC output overload protection.

So first thing first, let me show you fast charging. Currently, the design plan we have are the solar panel input and the fast charging. Input all into this Anderson, input over here, and it’s at 1250 watts input, I believe. So, let me connect it to this. Let me turn it around. When I connect it, you can see these displays going on. Okay, so I’m gonna plug it in, and as you can see, the screen just turned on, and then you can see that the battery is going up currently. It’s at 55 battery life.

ElecHive Portable 2500 Wh
Price: $1,899.00
The ElecHive 2200 is a game-changer in the world of generators! Thanks to its advanced battery pack technology, the ElecHive 2200 has definitely reached the ultimate energy density for a product of its kind.
Buy Product
View On Store

And then you can see on the input section, it’s around 1100 watts right now. It’s going up, it takes some time. Okay, so is that it’s over like 100 watts, and then right here the information will tell you hours to full. So, currently, it’s going to be about one hour to fully charge the ElecHive unit with the fast charging okay. Then you can see on that display screen, it’s around 60 volts and 25 amps. Okay, so now hours to full is changing still, it’s around one hour.

Now, let me plug into the load control, and we can show you that the ElecHive is charging and discharging at the same time. Okay, this is connected to the load control, so I’m going to plug it in and I’ll turn the AC switch on. Now, you can see, there’s input and there is output. So, the input is still over 1100 watts, and the output is around 800. And of course, hours to full is changed as well, should we increase some low? Let’s increase some load and we can see it.