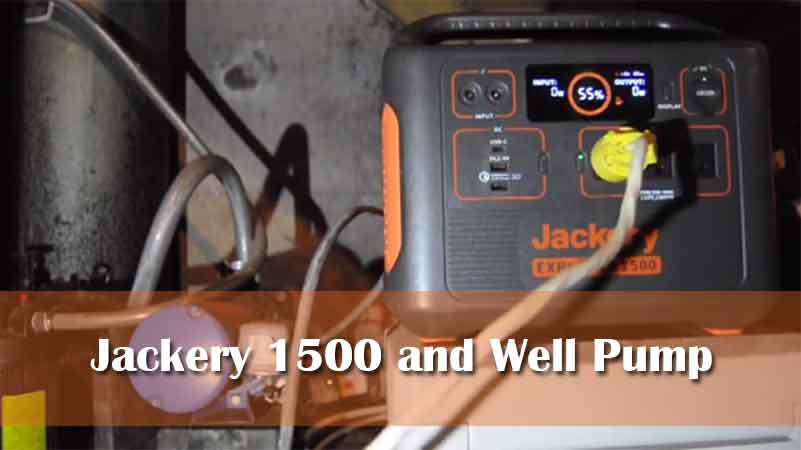 Jackery 1500 and Well Pump – I did a video about a Jackery 1000, and I claimed it would power a whole house. And I went ahead and tested all the items you might want to use it with. Now, it didn’t power everything. I needed one of the big things was a well pump in a grid site and a grid down situation. You want water, freshwater is a big deal. So, the ability to run a well pump a couple of times a day would be nice. So, what I did was, I bought myself a Jackery 1500. I’ve had it for a few months. This one will run the well pump. So, this is a bit of a spoiler for what’s to come next.

I will show you everything else. It will run because It will run everything Jackery 1000 will run which I did, but I wanted to follow up with this one because it does run a well pump, and a big wet dry vac which is good. I’m not going to go through all the specs, but it has USB ports. It has dual inputs which are nice, you can run up to 400 watts of solar, and I have solar panels for it. So, that’s nice, you do need some adapters, the screen is updated as well. There’s input-output, a nice new display for it now.

Running this originally with the Jackery 1000 caused issues because the inverter on Jackery 1000 was only rated for 1000 watts, and it did spike up to, I think 1300, but the well pump is a half horsepower well pump, and it takes quite a bit of energy to run off a Jackery. And this Jackery is registered or rated rather for 1800 watts. As you can see, the Jackery 1000 watt failing here. You can see the spike, you can also the difference in the display here, versus the Jackery 1500. And in this Jackery 1000, the motor is trying to start but didn’t quite have enough power, and the wattage really came up.

I think it was in one clip, it was going about 1400 watts for running something else. But it would the initial startup, the draw was too much, and so here is, the Jackery 1500, same test, same well pump. Now, watch the display, see it burst up to 1400 watts, and there’s a spike voltage even beyond that, which I don’t think it catches in time. Because the next time it runs, it doesn’t go that high. It settles down to about 1000 watts, but it does need that 1800. And I think, it bursts even too. It might even be 3600 for a couple of seconds when needed.

So, there you go, just to show you that the Jackery 1500 does run a well pump, and that was the clincher for me. That suggested to me that this indeed would run a whole house. If you had to various pieces of it, although the time length that it would run them for is obviously a different question. It’s a clip from the Jackery 1000, and of course, the Jackery 1500 will do this and more. So, here it is, running a bread machine, and it has absolutely no trouble running a bread machine here. It is running a 12-volt incubator, and again, it has no trouble running a 12 volts incubator.

A toaster is one that we actually have used camping. It runs it, no problem, 600 or 700 watts here, an iMac booting up again, no trouble, not a lot of load, laptops, and computers. They range from 50 to 100 watts, or 150 watts for a larger computer, and so no trouble again for the Jackery 1500, no problem. Here’s a mini-fridge that works perfectly well on the Jackery 1000, and of course, it’s going to work on the Jackery 1500. It will last even longer than that 10 hours of the Jackery 1000.

So, here’s the test again using the hairdryer which I thought was 1800 watts. It actually, seems to peak up at about 1400 watts, but again the Jackery 1000 was not able to complete this task. So, there you can see the 1300 watts again, and you know the Jackery 1000 couldn’t do it. There you go, this runs pretty much everything I’ve wanted to run with it, and everything I’ve thrown at it so far, and its peak surge amperage ability is the real key for me. Because when you’re talking about well pumps and some of those big inductive loads, they pull a lot of amperages right off the bat.  They’re called a surge load.

And if you’re running an air conditioner, for example, that’s another thing that runs a large surge initial load there. So, to have something that can burst above the rated wattage is a big deal, and so this is effectively my emergency backup generator. I pretty much can run the whole house. What I would probably do is back feed electricity into my house through an outlet being careful, of course, not to run past 15 – 20 amps. And in a power outage situation, I flipped the main breaker on a breaker panel first, and then, that’s something you can, or I would try in an absolute emergency. Of course, don’t do that, don’t do what I say. It’s very dangerous to do that, and you could cause a lot of uh trouble, and certainly, there’s a fire hazard too.

Jackery Explorer 1500
Price: $1,599.00
The Jackery Explorer 1500 brings the power – that is stable, safe, and it offers huge 1488Wh capacities, 1800W AC outputs, and a fast recharging efficiency, which will run up to 7 appliances all together at once. It will suit your need, and restore happiness – whenever, wherever, for camping, RV/Van life, any outdoor activities, or emergency home backup.
Buy Product
View On Store

If you’re pulling, if there’s a lot of devices on the circuits in your house, everything’s plugged in, that’s gonna try and pull a lot of amperage through your wires which could start a fire. But all that being said if you know what you’re doing. This is a great grid-down emergency situation system, and this does everything I need. Now, the secondary question is how long will it last for and that’s not something I’m going to cover in this article. But suffice to just say the Jackery 1500 does everything I needed to. I’ve got solar panels to charge it up. And this is basically what my generator is, a lot of people run gas generators, I’ve chosen to go the electric route with solar panels and solar generators. So, there you go, my review of the Jackery 1500 is that it’s exactly like the Jackery 1000 just a lot more powerful, and a lot more capacity. So, I’m very very happy with it.