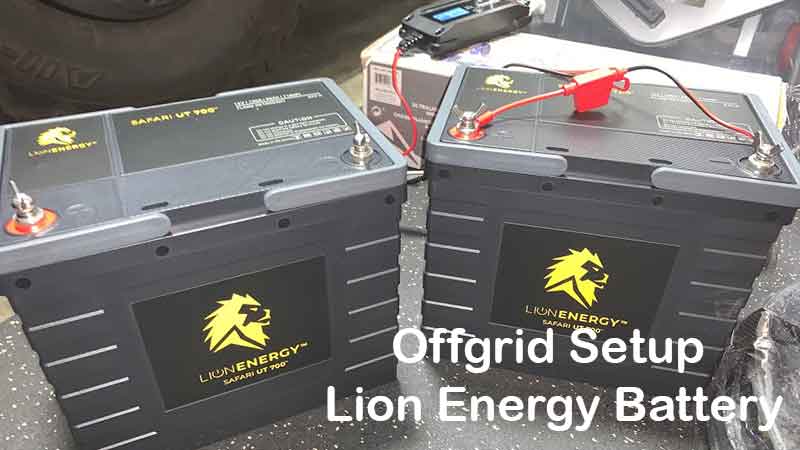 Offgrid Setup Lion Energy Battery – Lion energy is a company based in Utah. It’s an American company. I saw these two lithium-ion batteries on the website last week. So, these are the UT700. I want to say for two of these lithium-ion batteries the packaging is excellent. There are no dense things, I thought about this and I was thinking that two batteries might be overkill.

Why do I need to? I was thinking about my setup with my e-cooler. That’s primarily what I’m going to be using batteries for. Also, this is all supposed to work is a solar panel goes through a charge controller connects to a battery, charges the battery then from the battery goes to the inverter, and then remember the inverter has three AC outlets and then poles for DC connection.

And then from here, I can plug in the cooler, my camping lights, phone chargers, speakers, any electric accessories while being off the grid. So, to come back to what I was saying earlier, the two batteries. I thought about this, I would want one battery to run my electrical components while I’m charging the second battery.

So, actually having two batteries is a really good solution that I hadn’t even anticipated. I was kind of forced into that, and I think it’s actually genius, I mean, I don’t have an RV or a car camping setup. This is just mostly for convenience, and it’s also good to have power, I mean, you could run a lot of stuff out in the wilderness off of these pretty serious batteries.

So, I’m going to open these up. I got them down to the actual boxes of the batteries. These are 56 amp-hours. These two lithium-ion batteries. I’ll be able to run a lot more things but for the basic kit, I mean, 400 watts should be perfect. You’ll be able to run a small fridge, probably, and even some of the other chargers or electrical accessories that you have.

I think you can link up to four solar panels, and then you can pick which battery you want or you can get it without a battery. So, here’s the next level of opening, little terminal connectors, silica gel, don’t contact the retailer, contact line energy if you have problems.

These are pretty nifty. There’s a carry handle. The specs 12 volts, 100 amp, 56 amp-hours, 716 watt-hours. You can kind of use that to figure out, what your use is going to be. This thing is in great shape. It’s a brand new product. This is about 15 pounds, it’s very easy to move around, easy for women and men.

Lion Energy UT 700 Lithium-ion Battery
Price: $499.00
The Safari UT 700 from Lion Energy is one of their most popular batteries for a reason: value for money. Getting a 700wH lithium-ion battery that lasts 14 times longer than lead-acid or AGM batteries is nearly impossible for its price point.
View More Details
View On Store

I’ll probably build a little box with this inverter. Probably just some plywood, or some two-by-fours, I have to lay around. So, I can move it around the inverter, which probably weighs more than the battery. So, what I’m gonna do with this is for my camping setup? I’m gonna use my Duracell battery charger. I also ordered the tender. but I honestly think the Duracell might be better.

So, what I’m going to do for my setup is, I’m going to charge these two batteries at home before I go off the grid. And then, when one of them is discharged, I can charge that one with solar power while I’m using the other one, theoretically. I love to live in the world of theory. I could live continuously with electrical accessories, a cooler, and all that stuff off the grid if I have enough solar power.

So, that will be the next thing to figure out in the kit. So, I’m gonna get this linked up, I’m gonna start charging it, and we can look at that. I put the battery connectors to the Duracell on here. There are lock washers and washers. They make that easy with that little bit of hardware. I got this in lithium lithium-ion mode, you press and hold that, and the batteries look like came charged at 50 from the manufacturer.

So, I’ll get both of these charged up. We are going on a trip this weekend. It doesn’t look like I’m gonna have those solar panels, but having these two batteries charged up will run my electrical stuff for our three-day trip, that should be no issue.