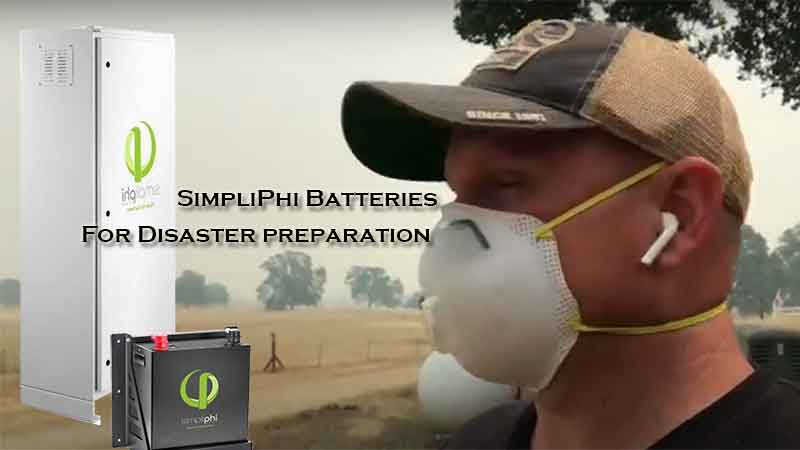 The smoke is extremely thick, the hillsides back here behind me, that’s actually that the first time that I could see, like where the shooting range is right back there. That’s only about 200 yards away, 225, and for the last couple days, it’s really just been tough to even see, that you can’t even see the hills out at the end of the back of the valley.

So, the smoke is very thick, and it’s very hard to be outside. I had to use my generator a little bit, but amazingly, even with this much smoke cover my Solar, has been meeting all of my utility needs to be granted that I’m not able to do any like.

Really, I’m not able to run my swamp coolers, because the smoke is so thick. We can only use them a little burst when the wind blows out the smoke, but I’m really able to keep up with my solar, and the lithium batteries that I put in from SimpliPhi.

Simpliphi AccESS with 3 PHI
Price: $13,548.39
DETAILS SimpliPhi your power with AccESS to a fully integrated energy storage and management solution AccESS power security with safe, reliable, non-hazardous, and efficient energy source AccESS any power generation source with intelligent management AccESS your own power when and where you need it.
View Specifications
View On Store

SimpliPhi has made a drastic difference, also because of the fact, that you can run them in a post partial state of charge. I’ve only got up a couple of days to 85%, but then the rest of the time, I’ve maxed it out. We’ve been stuck here at home since Friday roughly, we haven’t been able to go and tell them because if you go into town, you can’t come back home.

And what the looting that’s going on, and just the security issues, and just really wanted to stay home to be careful, because the fire, they’re getting ready to do a back burn. We just want to make sure that our house is safe, and that we’re good to go.

I know you can see the smoke behind us, everything we got going on. you can also see what I took. and I use the blower. and pretty much blew it. Everything that I weeded down to the dirt. So, I have a pretty decent fire clearing. I had a little on the hill left to do, but we really did the best.

I could out in the smoke trying to get the rest of my fire preparation, everything cleared away from the house and as safe as possible.

I want to show you just a couple of things that I think are critical. So, I got the system done, right before inner solar, and I upgraded the batteries, the SimpliPhi lithium. The lithium-ion phosphates, the LFP batteries. I got these in right before I left, and I gave you guys a quick overview, all I got to say these batteries have been working amazingly.

I’m probably using right now with all the cooling that I’m doing about 75% of their capacity, but what’s really been great is, having the second flex net has allowed me to get in here, and that all the banks are running pretty. Evenly, they fluctuate a little bit, but as it’s kind of like the thing is, the BMS is regulating what’s going on.

Let’s go back here, let’s go, to data log, you can see like it’s been super smoky, and we still are able to kind of keep up and break even. We’re not doing too terribly bad some decent usages. There’s a negative over annum. I have used him hard because of the post partial state of charge. I’m not near as worried about it, as I would be if I was run on the standard lead acids.

SimpliPhi Batteries For Disaster preparation – So, these are just a couple of things I watch other people struggle with. I wanted to point out that these are great additions that people should think about. If you live in an area where you think you’re gonna have these disasters, so we live off-grid, and preparation for us.

Are SimpliPhi batteries good?
These batteries are Lithium Iron Phosphate (LiFePO4) 1 which is the safest and most durable lithium battery chemistry. SimpliPhi says their batteries are non-toxic. The US Federal Aviation Administration (FAA) rates them as safe to be carried on planes and they are used by the US military.

How much does a SimpliPhi battery cost?
Oxnard, CA (August 15, 2019) — SimpliPhi Power, a California manufacturer of non-toxic, safe residential, commercial, and mobile energy storage and emergency power systems, announced today that it is slashing the price of its most popular PHI 3.8 kWh 48V battery to $0.66 USD/watt-hour MSRP*