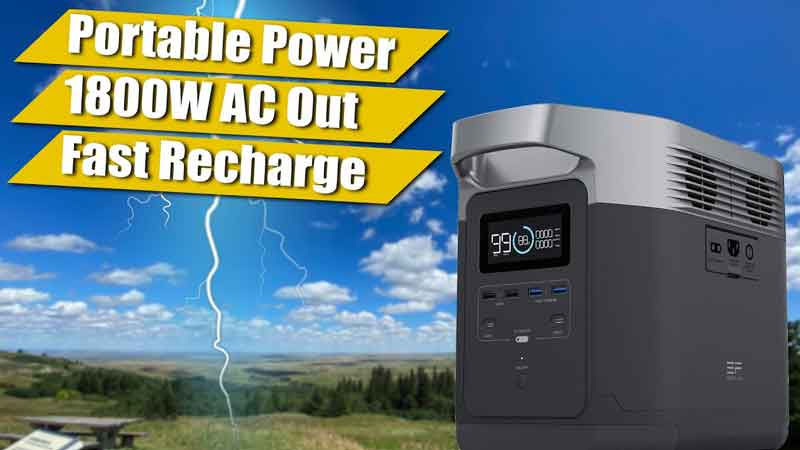 EcoFlow Delta Fast Recharger – Today, we’re doing a bit of camping and some testing of some new equipment. I have an EcoFlow EF Delta battery bank or solar charge unit, or there are many different names for them. I call it a very large battery bank what it does for me is more important.

I spend quite a lot of time out camping, and I’d have to take a lot of camera equipment with me, and it becomes a problem for me to keep everything charged up. Especially, if I’m gone for two, three, four days then that’s not really ideal to try and keep camera equipment working.

So, what I have been using is a Jackery 500 watt unit that I’ve used in the past, and that’s fantastic. I still use that and depend on it on almost every trip. The only time I don’t take that is when the temperature drops to below minus 10 celsius, and which all of these units suffer quite terribly.

I don’t bother taking them out, and I have other methods of keeping things charged up if I have to, but what this does is provides a lot of freedom compared to the Jackery. This is about twice the size, and I’ll put all the stats up because I’ll never remember them.

EcoFlow Delta Fast Recharger – All there’s way too much to remember, but what this unit will provide is enough power for me to stay out for extended periods, and even run something like a refrigerator. If I want to keep things cool for instance, it’ll put out about 1800 watts. Across all six of the 110-volt outlets, it also has USB type-c USB 2.0 12 volt outlet. It takes different types of input as well. So, if you do have an outlet that you can plug it into.

So, what I really like about this unit compared to something like the Jackery is, it doesn’t have a power adapter, it doesn’t have a brick, so for charging, you can use either with a 110-volt outlet, and it’s a normal c13 plug. The same as you have in your computer, you can charge it with 400 watts of solar energy, or you can plug it into a 12-volt outlet from a vehicle.

If you’re on a road trip, for instance, you can charge this up again. It’s very versatile, the sheer size of it gives you some idea of how powerful this thing is. So, it is for the larger consumers, if you’ve got lots of stuff that you need to run, and you need to run it for a long time then this probably is the way you’d like to go.

I have been using it for a couple of weeks. I’ve been putting things on and off charge, and I can’t substantially drain this thing down very easily. I’ve charged laptops, phones, you name it, all my camera gear, and the thing hardly loses any power as you’d expect. It’s such a large battery, in addition to my equipment, I normally carry when I’m out on my UTV is a gas-powered, chainsaw.

However, I’ve just switched to an electric chainsaw, and this is one of the reasons why without this unit, I probably wouldn’t have considered a battery-powered chainsaw, I know that I can charge that chainsaw up several times. This has so much power, so what are the main benefits of having something like this, it gives me independence. I’m not having to worry about where my next charge is going to come from.

This will run so many different things. I can run lighting, I can run my chainsaw, I can charge everything up all my camera equipment. I’m never going to have to worry about power again, even on extended trips. I can’t get through the entire what this battery can hold, so that’s very impressive. This also has great uses around the home as well, because it can put out quite a lot of power you can run certain power tools with it.

If you need to go somewhere, you don’t want to run an extension cable, you can take this out with you,  plug it in away you go. This has a surge capacity of 3,300 watts. It won’t run the tool at full power at that, but it will take that amount of starting. Your starting power something like an air conditioning unit wouldn’t recommend running that for very long on this, because they are pretty hungry.

But something like a powerful hand tool will startup, and then once the drawer drops then it will run continuously at the regular power. This is obviously not an exhaustive test, but I wanted to see whether my biggest power draw tools would actually run happily on the EcoFlow.

So, I did a quick test cutting some 4×4 with my reciprocating saw. This is a 12 amp pull unit, so it is pretty power-hungry, and it ran just fine, just ran like it was running on normal power. The next thing is my heat gun, which I use quite often, and this does pull a lot of power. This sometimes trips my breaker in the garage, and it’s meant to be rated to around 1300, and some watts, but when I actually checked it on the display it was playing 1430 watts.

And it was quite comfortable the runtime, it displayed was about 52 minutes. So, that’s actually quite impressive for me. This is going to be great in Canada. We do get quite a few power outages, especially, in winter. We have overhead power lines that go through our neighborhoods, and occasionally, we do have problems when we lose the power.

So, it’s great to have something like this. I can keep all my computer equipment running, for instance, I keep my router running if I need to get on the internet, I can plug in a refrigerator, my freezer, lots of different options. I could even probably run my furnace which is obviously important to keep the home warm.

EcoFlow RIVER 600 Pro
Price: $649.00
3 x 600W AC OUTLETS AND 720Wh CAPACITY The RIVER Pro can power up to 10 devices simultaneously with multiple outlet options, including 3 pure sine wave AC outlets. It offers up to 720Wh power and it weighs just 15.9lbs, which makes it a portable power source for adventure on the go.
View Specifications
View On Store

So, I could think of a million and one uses for a product like this. The benefit again over something like a gas-powered product is, yes a gas product will run for longer periods, but then you’re dealing with starting issues. You’re having to put gas in it, service it, etc, and how often do you really run a gas-powered generator as the average consumer.

I have one at home, I run a couple of times a year, if I go camping in a trailer with this, I probably wouldn’t even bring it with me. I would just bring this unit, and I know, I can run laptops, everything in the trailer quite easily on the built-in batteries, or with this providing 110 power as well, combine this with a couple of solar panels.

I already have at least 200 watts of solar energy that I can charge up. I could charge this thing back up during the day, and use the power overnight. So, it’s one of those key benefits. This technology has moved on so much, and the price has actually come down significantly too to make these things affordable.

If you haven’t considered one of these units before, it might be time to have a look the prices are actually coming down, and the features have just gone up considerably, what these things can do now is quite amazing. There are lots of products and markets from different manufacturers, and from what I’ve seen with EcoFlow, they are one of the leaders at the moment.

They have more features than some of the other products. I do own a Jackery product, and I still recommend them. I think they’re fantastic, mine is a 500 watt, I said the only real drawback I have with the Jackery is, it has an external brick, which I’m not a big fan of this. I don’t like that, I’m not worried about having that brick fail, I can plug in a normal c13 from the back of a computer plug, this in a way I go.

So, that’s one of the key benefits of this unit. This is pretty heavy, it’s about 30 pounds in weight or 18 kilograms. So, this thing’s pretty heavy. They do supply you with some nice things as well, so this is a normal MC4 connector for a solar panel. Most of them use this type of connector, and they provide this for you.

EcoFlow Delta Fast Recharger – They also provide you with a normal 12-volt car charger as well, which very handy, and there’s also the normal charging cable which I didn’t bring with me today. Obviously, because what am I going to plug it into and there’s also the normal 110-volt charging power cable, the C13 which I didn’t bring with me, but you get the idea.