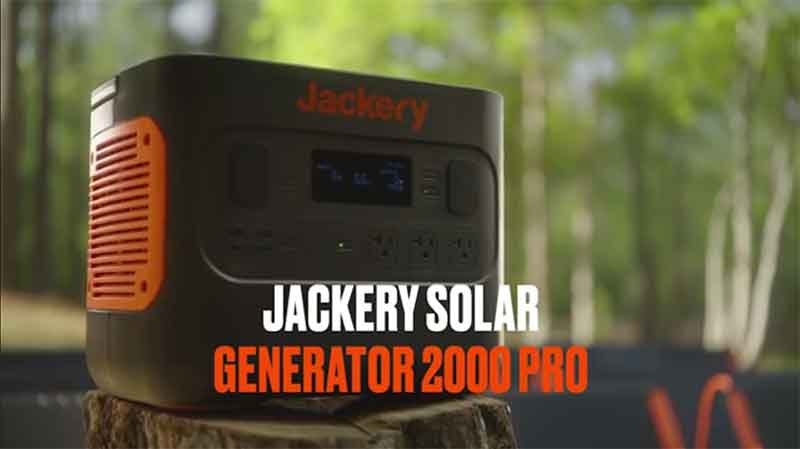 Jackery 2000 Pro Review – After almost two years of waiting, Jackery has finally released their new product called the explorer 2000 pro on May 12, 2022. This is in fact a 2200 watts power station, and the battery inside has a 2200 watt-hour running capacity. Inside the box, all these cables and adapters are really well made. They also include two solar adapters as well. These are the devices that can allow you to plug up to six solar panels into the unit directly.

The device weighs 43 pounds. So, it’s certainly not a lightweight, but you can definitely manage it with one hand. And I like the fact that they finally changed the handle. So, you can fold it down when you’re not using it. You don’t end up losing space on top, but one disappointment is, that there’s no wireless charging pad, and it kind of seemed like this would be a perfect location to put one.

The physical size of this thing is really impressive. It’s only just a little bit bigger than their original 1000 watts power station. It measures 15 x 10 x 12 inches. They made some significant updates to the design but they still kept things like the led flashlight and kept all the outlets on the front of the unit. Now they added rubber covers, and these are going to be good if you get dirt or dust in there. But if you don’t like them, you could actually just pull them right out on the front of the unit.

The biggest improvement is the display. It’s not a quite full color but you’ve got multi-color that gives you all the information you’re going to need, and it is a smart display. So, you’re going to see the amount of power going in and out, and it will do smart calculations to give you an idea of how long the unit is going to take to charge, or how long you can run the battery before it empties out.

You’ve got 3 AC outlets in the front, and each of those is capable of putting out 2,200 watts. They’ve included 4 USB outlets, 2 standard USB-A, and 2 USB-c that are rated for a full hundred watts apiece, and the led light in the front has three different modes high and low. And it’s got an SOS, and you’ve also got the standard 12 volts cigarette adapter, and that is fully regulated. On the back of the Jackery are the ports you’re going to use to charge it up.

Jackery 2000 Pro Review – Now, you can do it 3 different ways, you can plug it in the cigarette adapter in your car, or you can charge it using a solar panel, but the best feature of all is that they finally got rid of the AC adapter, and you can charge this thing with a standard power cord. You can charge this thing to 100% in as little as two hours. They’ve now got a fast charging option, but I also wanted to make sure that you could be using power while you were charging it up. So, I connected my 1200 watts heater while I was charging the unit up, and it was able to do that function correctly.

I also wanted to make sure that the plugs were all putting out pure sine power, so I use my Tektronix analyzer, and confirm that all of the outlets are putting out pure sine power within spec. But as you can see, there’s a little bit of distortion because the inverter has a small amount of noise that’s why that curve is not perfectly smooth. But it is still better and cleaner than what you’d get at your normal house outlet.

It’s also pleased to see how quiet this unit was. There are many of these on the market that just make too much noise, but this one was nearly silent, and the fans inside are smart. So, they’re only going to be on when they need to be. The Jackery is rated for a continuous output of 2,200 watts but it can also surge up over 3000 watts. so, I wanted to put that to the test here. I connected up my heat gun ramped it up to 2,600 watts, started my timer, and to my surprise, this thing could handle a surge for up to 30 seconds that might not sound long, but that’s plenty of time to start up something like a compressor, refrigerator, anything that has a large startup drawer of power.

There are many cheap power stations on the market that can only run their surge watts for under 1 second. Many people use their Jackeries off-grid, so solar panels are going to be a must, and fortunately this device can handle up to 1200 watts of solar input decree does a really good job with its panels. They fold out easily, they’ve got these rigid ends, and they’ve got built-in stands. They take just a few seconds to set up. You can use as little as one solar panel or up to three, and they’re going to plug into one single adapter, and then it plugs into one of the ports on the back of the Explorer 2000.

Jackery 2000 Pro Review – Mentioned that the cables that come with these solar panels are really high quality. I would say overall the build quality of this unit and the panels were excellent, and when I connected them up wasn’t really too sunny of a day but I was still getting about 400 watts total. But if you were gonna charge it at the full 1,200 watts of input, you could charge it up in as little as two and a half hours just with the solar panels directly.

Now, so far everything seems really good for this Explorer 2000, but there is an elephant in the room and that’s the batteries inside the unit. To many people’s surprise, Jackery continued to use regular lithium-ion batteries. Now, they are of high quality, and they do rate them for a thousand charge cycles. People nowadays are looking to use lithium iron phosphate batteries, and that’s going to give you a much longer life.

If you want a portable unit like this that’s tough because those iron phosphate batteries weigh significantly more. And they would have made this device physically bigger. So, that’s going to kind of make this thing less portable and that’s not going to appeal to a lot of people. So, I imagine they had to make a decision on what kind of battery to use to give you the best combination of portability and keep the weight down low enough. So, that people could actually carry it.

The other things I didn’t like were the features this doesn’t have any wireless charging, and Jackery still doesn’t have any type of app control. But they’ve got a really good reputation for being reliable and delivering good solid electricity. And for many people, that’s all they want and if you’re a Jackery fan, this is definitely one to consider.