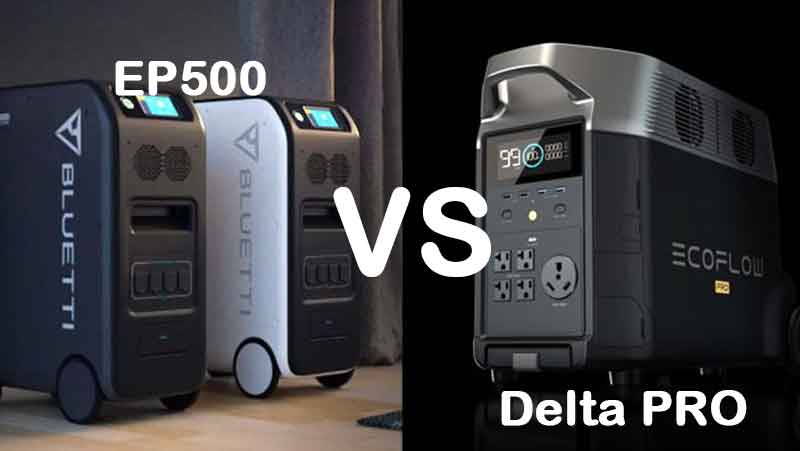 Both combine a massive internal battery with an incredibly capable and powerful inverter. They also feature a variety of convenient and practical output ports, as well as many other user-friendly features.

As you can see from the chart above, both units are incredibly capable solar generators that can give you reliable access to power during blackouts and other emergencies. When paired with solar panels, they can act as self-contained solar power stations, so you can even use them to reduce your monthly electricity bills by using them to supply your electronics with free solar electricity.

While they certainly have their similarities, the two solar generators also have their differences. For starters, the EP500 can store more power, while the Delta PRO is far more portable, features Wi-Fi connectivity, and can be charged much faster.

Which is the Better Option?

The Bluetti EP500 is an incredible solar generator and can be a helpful resource during a power outage; however, it is also quite heavy and bulky, so it is not the best option for anyone that plans to use it outside of their home or RV.

On the other hand, the Delta PRO is nearly 70 lbs lighter, roughly $1,500 less expensive, and far more versatile. Overall, we have to give it to the EcoFlow Delta PRO. With that being said, both solar generators are outstanding, so the decision mostly comes down to personal preferences and your own unique needs.

For the best prices, explore our discounts and promo codes by clicking below:

Remember, solar generators are in high demand, so supplies are not guaranteed to last!