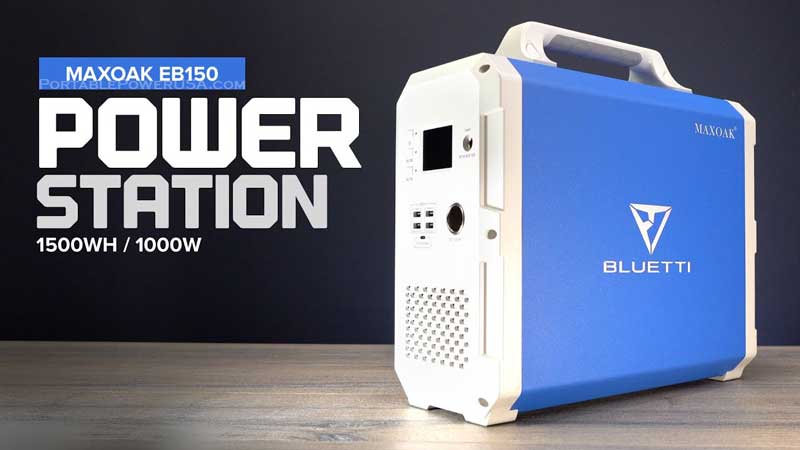 Battery Power Station EB150 1500Wh/1000W – I have the EB150, this, of course, is from Maxoak, the Bluetti. These are battery power stations. So, if you are in the field, you want to fully charge up all of your gear, I would normally take this, and have this in my car. Power up all my drone stuff, as well as my tablet, phones.

This is able to do that as well, but the difference here, of course, we have a lot bigger capacity. I was traveling a lot more, so this was in the back of my car all the time, and then, when I was able to finally get over to testing this one out, this whole issue came up never after about one of the limitations.

You’ll see of course, with something that has a smaller battery capacity is, that you’re not able to power up larger appliances. Now, something like this was perfect, because it’s light, it’s like 13 or 14 pounds. I’m able to power up all my gear, my laptop, my action cameras, my camera gear, my drone batteries, all off of this, while I was in the field.

Now, of course, one of the biggest benefits of having something like battery-powered ones, you’re not dealing with gas, or you need to be outside worrying about fumes. Everything is powered up through these batteries here. Now, while small devices are easily charged through something like this, I did have some limitation,s because of the fact, that I’ve been home for the past few months now, and what I want to do now to test out something like this if I can use the EB150 to power up a lot of my larger appliances here at home.

Compared to some ideas, where the max output on this is a continuous 300 watts, or here, we have a max continuous of 1000 watts. What I was able to power up off of the EB150? See what worked, what didn’t work? Kind of where that breaking point was, as far as what this thing can hold, what this thing can power up.

I just want to show you quickly, what is on the front and the rear of the max EB150. Here, we have the LCD screen, right up front, just let you know how much battery power you have, shows you the input and the output, whether it’s DC or AC. Of course, we can turn the AC or DC on with these switches right here, input-wise, if you wanted to plug this into your wall and charge it from your wall outlet.

It takes about 10 hours to fully charge this up, or if you have solar panels, you’re able to daisy chain those together also get 200 watts of solar power into this, and also takes about 10 hours. On the front, we have four 5 volt USB ports, right here on the very front, as well as a USB-C also if you have something that powers up off of something like a cigarette lighter, we have a DC 12 volt cigarette lighter right here on the front.

And then of course, on the back is the important one, we have the full AC outlets, here on the back the 110 volts. We have two of those right here, nice, large fan, now this one definitely is a little bit heavier. This is 37 pounds versus the AC50 which is about 13 or 14 pounds, definitely has a lot more capacity compared to the AC50, of course, it’s going to need that to power up some of these larger appliances.

MaxOak EB150 Bluetti 1500wh
Price: $1,199.00
The Bluetti EB150 solar generator is one of the best-selling solar powered generators of all time. With it’s 1500 watt hour lithium battery and 1,000 watt power inverter, the Bluetti EB150 is the perfect portable power station for everything from full-time RV living, van life and camping to backup power in case of a power outage or emergency situation.
View Specifications
View On Store

And then also my iPad is charging up, as you can see, I’m barely drawing any power DC, I got 22 watts and then eight, I got 207 next up. We’ll use is a little wet-dry Vac, which is already powering up, this hit cook, and that’s starting to use up 266.

We are powered up, so it did not trip the box using right here, you can see, 300, 307 watts drawing in all of that to reheat the water. So, anything that deals with normally with heat hair dryers, personal heaters, those pull in a lot of power, a lot of energy.

The next test, we have is an iron. See if this will power up the iron right now. It is plugged all the way around to the back, let’s power this ON right now. Now, that we’re plugged in turn the AC ON, and it jumped up real quick, and there you go, as you can see, it jumped up past 1200, already hit all the way up to 1400, and of course, the safety power went down. That’s on air-fry power AC back on.

You can watch the video below to see the further tests.

Just having that peace of mind, that you do have some extra battery power available for you. It’s such a big deal, and not have to worry about something like having a gas, or one of those bigger generators, or inverters, that you’re gonna have to carry around. Some of this works really well.

Now, the first one of the biggest deals with these things is, that they don’t come cheap, I mean even something like the AC50 is still a few hundred bucks. I think this thing still runs about 400 bucks or so,  and so like the EB150 will still be a little bit over a thousand dollars. This thing runs about 1200 or 1300.