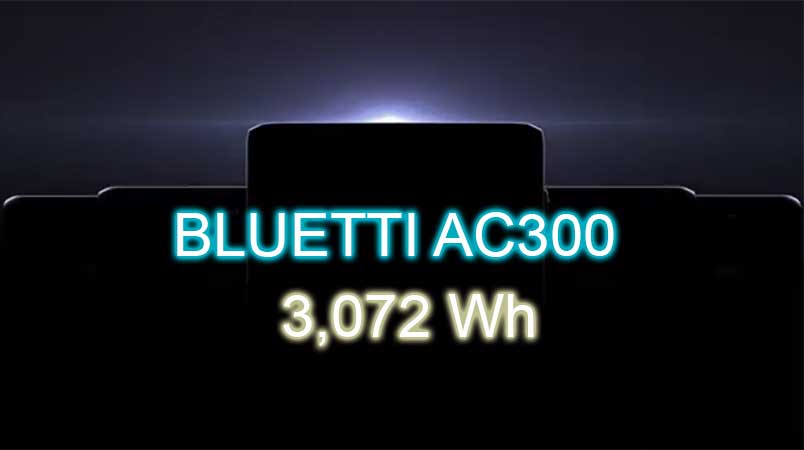 BLUETTI AC300 3072 Wh – At the beginning of July 2021, BLUETTI released the AC200 power station, which drew in massive sales and crowdfunding results. Since then, BLUETTI continues to improve on its power station products with new releases. Their latest announcement launched several new products that encompass the innovations we’ve seen from them over that past year. The simultaneous launch from BLUETTI includes the AC200 MAX, the AC300, and the expandable battery modules B230 and B300.

These four new arrivals follow BLUETTI’s classic design language of their AC series: A delicate, rectangular power box with two solid lifting handles on the top of each side, and the AC300 is no exception. Yet surprisingly, the AC300 does NOT come with an internal battery pack. Its modular design allows users to select B300 battery module to mate with the AC300.

This new modular design is a bold move for BLUETTI, but for a heavy-duty unit like BLUETTI AC300, this design not only significantly reduces the weight of every single unit but also allows users to replace any or all batteries, if necessary, in the future. And since the system is modular, users can carry each module individually. Whether it is up the stairs to the bedroom, or outside to van, users will be protecting their back from heavy lifting by being able to carry the modular BLUETTI system, module by module, instead of everything at once.

Previously, BLUETTI caused a few waves with their 3,000W home power center called the EP500 Pro. Now that they have completed the crowdfunding campaign for the product, it’s time to introduce the new modular 3kW flagship model- the AC300. While the AC300 doesn’t come with an internal battery pack, the modular design enables you to use your own selection. The new B300 battery module makes for the perfect pair with the AC300. Batteries are now replaceable, with the ability to simply swap them out when needed.

Bluetti AC300 is easy to assemble considering its modular design. It can be easily ported in between different rooms or can even be transported. The technical specifications include a 3000W pure sine wave inverter with an MPPT controller to safeguard the appliances. A single unit has the capacity to hold a whopping 12.3kWh capacity by coupling a maximum of four batteries.

It is an advanced version of the AC200 and AC200P while featuring several changes and improvements. The advanced solar version – AC200 Max offers 2200W output power. It offers a direct 100W PD 3.0 USB-C port charging option and an MPPT for 900W solar input. Furthermore, the carries a 30A NEMA TT-30 outlet for RVs. Bluetti AC200 MAX also carries the ability of wireless control via iOS and Android App.

BLUETTI never fails to amaze its fanbase with its vast array of power stations and the BLUETTI AC300 3072 Wh and AC200 Max are no exception. Aside from them being efficient and reliable, they are also portable. Built with the design of the AC series, they come with solid carrying handles on both sides and in a robust construction. The same goes for the BLUETTI B300 and B230 battery packs. All four new products arrive in a rectangular shape so you can pile them on top of each other with ease.