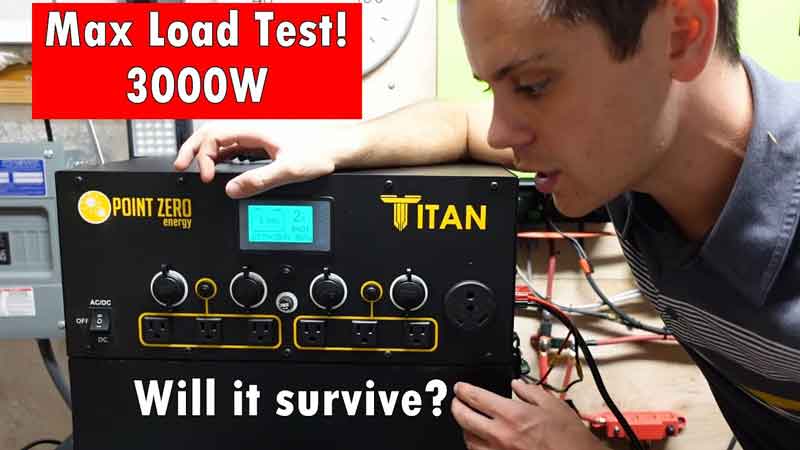 Test Titan Solar Generator Inverter 3000W – Today, we’re going to do a max load test on the titan solar generator, because on our previous test it failed. And it did not work as advertised, and my previous Titan failed because there was a problem with the over-temperature circuit. One of the resistor values was wrong and it was a manufacturing defect. This one should not have that problem and should work as advertised, and all the other Titans that are being shipped outright.

Now, let’s test it out. This morning I connected 600 watts of solar panels, and we have an open-circuit voltage of 110 volts. So, fast forward a whole day later, and the Titan is fully charged. I use solar to charge up to 75 percent, and then last night, I use an ac charger to get up to 100.

We have 1500 watts over here, and 1400 watts over here. We’re gonna run this load for as long as possible, and we are pulling 3.2 to 3.3 kilowatts from the battery shunt. So, this is a very strenuous test,  and previously, it cut out after only three to four minutes.

But this one should be fixed. Let’s see, how long it can run. The Titan is actually passing this test. So, I switched it over to kilowatt-hour counter mode, and we’re going to also do a capacity test. We ran a 3000-watt load all the way to zero percent. I’m not sure what the capacity is I need to look at the footage real quick.

So, we measured 3530 watt-hours at the AC output. Now, we’re going to divide it by the inverter efficiency, we’ve got 4152 watt-hours, and these batteries are only rated for 4000 watt-hours. It actually exceeded the capacity rating at more than a 1c rate, which is actually really good. That’s pretty impressive, so it’s actually working as advertised. I’m so happy.

So, we’re going to add some solar power and charge back up. Now, we’re charging at 835 watts, as you guys know in a previous video, we had a failure. The over-temperature sensor was being triggered because one of the resistor values was not correct. It was a manufacturing defect, so what they’re going to do now is long-term testing with the max load on every single unit to ensure that this never happens again.

The problem that I had was only on 15 units. So, as always, I seem to get the worst luck when I do these,  because if everything worked that wouldn’t be very fun. Something else I want to mention about the Titan is, that the inverter standby consumption is very low for a 3000 watt. Inverter typically, they’re around like 40 or 30 watts continuous if you spin like fifteen hundred dollars for a Victron.

It’s like six to 10 watts for the multi-plus 2. But this one only uses 10 to 15 watts, and considering the price, is what you get, that’s really cheap and really good. That’s why most people that buy these, do run them 24 hours a day. Because the standby consumption is so low.

Now, I’m gonna test this unit for the next couple of months in this shed with one of my solar arrays.  We’re gonna have 600 watts connected non-stop for a few months, and we’re going to use the battery expansion connection to charge up my large solar shed battery.