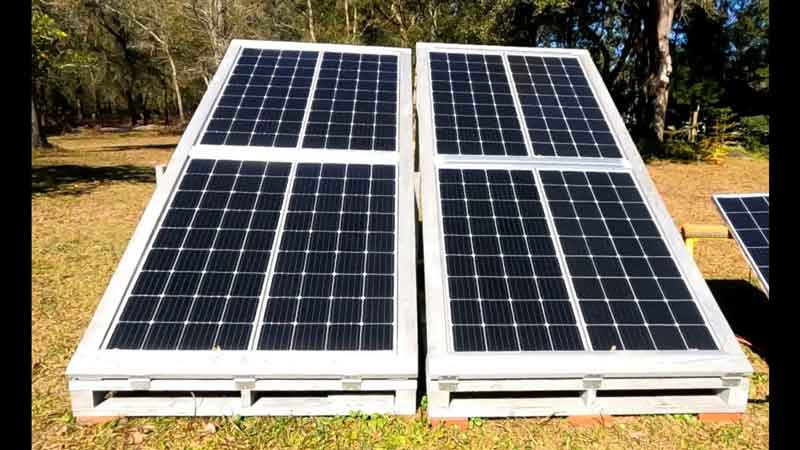 Setup Bluetti AC200 With Solar Panel – I’m out here on a nice beautiful bright sunshiny day, and I want to show you, how I have my solar panels connected to two of my ac 200 Bluetti solar generators. There’s only one pair of wires going inside the house, and they’re able to charge both of them at the same time.

And I’ll show you, how I’ll do that. Now, we’re underneath the panels here, and what I started out with this panel here, start out with the negative. This positive here is what’s going to be connected to the cable that is going to be running into the house.

So, this here cable here is what runs into the house, and so this is one of the four and this is the other four, and this here runs over this way to these four over here. And it’s connected with this one here, which I said, where you connect glass.

By connecting these panels and series-parallel, you have this one cable that’s going in the house. It’s carrying 1,400 watts, so the same with this right here. These wires are number 10 gauge wire, and number 10 can carry up to 30 amps.

So, I’m below the maximum amperage that these can carry. I’m only having one pair of cables running into my house with this setup here, and they’re able to charge both of the Bluetti AC200 at the same time.

And let’s go in the house, I’ll show you how that’s done.

Okay, I’m back in the house now, and these are my two buoy AC200, and they are the top one is the AC200, the original one, and the bottom one AC200 which has the lithium or phosphate batteries in there.

We take a closer look at these, as you can see here, the top one here is charging, that it’s bouncing back and forth for the MPPT, and that’s what they’ll do. And it’s bouncing back for between 400 watts and 700 watts is that 61 charge.

This also has an output voltage that is running my refrigerator, and my internet, and pulling out 360 watts. Right now, this is a pass-through, it’s charging at the same time that is using the power on the output. The bottom one here at the same time is also set 600 and 700.

So, you can see how it’s bouncing back and forth, and it’ll do that as the MPPT are competing with each other and destroying power, but overall they’re drawing about from trying to look at them at the same time.

Here looks like, they’re pulling well over 1000 watts together. Okay now, looking over here, these are the cables coming in just a pair of cables, here one’s negative, and one’s positive. And these coming in are being split up with a splitter. I have that, I bought this adapter involved on amazon, and it takes the one leg that comes in here and splits it into two negatives going out.

And same with here, you have the positive, and it’s supposed to output. Two positive coming out, and the source from the solar panels are coming in from here. If we do a test now, to see how much is how much current is actually coming in.

You have the other one having four amps coming in. So, it’ll bounce back and forth as MPPT, they switch back and forth between the two power generators, and that’s perfectly normal.

So, you can see that, I got 1400 watts outside with solar panels, and so I’m able to charge both of these at the same time. Now, as these charges back and forth once. One of these power stations gets up to a hundred percent, the other one will come up to some hundred watts.

If it’s available to come up somewhere it was, and this, and it’ll stay steady at that now. The thing to remember is, that it doesn’t make any difference, how many watts should put into these.

In my testing, I can put like seven 1400 watts into just one of these units. The parameter that you have to pay attention to is, the voters themselves, and on these particular units, the voters are the range is between 35 votes and 150 votes.

You do not want to go over 150 volts, as long as you stay below at, or below 150 volts you’re okay and doesn’t make any difference how much watts you’re throwing at these things.