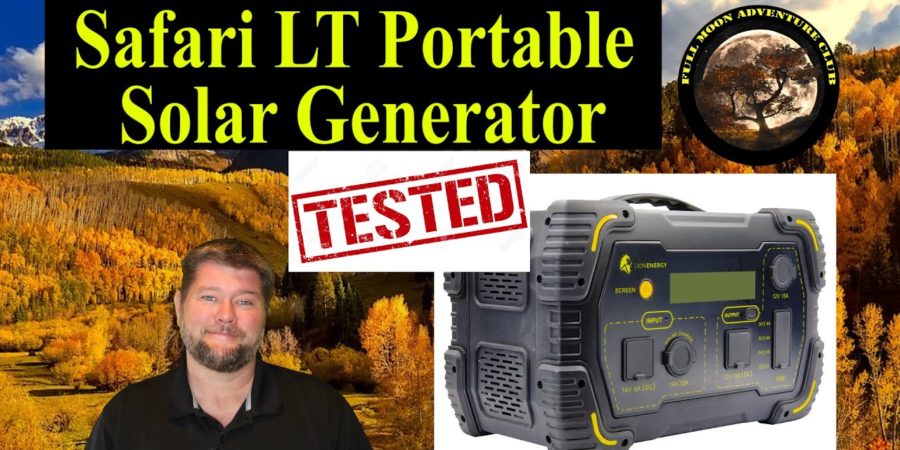 Safari LT Solar Generator Review – Today, we’re gonna be testing out this little portable solar generator. This is called the Safari LT. This guy is insanely portable at weighing around ten pounds, so you can pretty much take it anywhere. It takes up a very small amount of space.

It has a lot of power-packed insides. It has 450 watt-hours of power in the batteries and it also has a 500 watts continuous pure sine wave inverter, so it’s safe for all kinds of sensitive electronics, and it also takes a hundred and forty watts of solar or charging which makes it incredibly fast to charge.

One of the faster ones on the market for this size. So, we’re going to be putting it to the test to see what you can actually do. I’m going to be trying it against my giant double door LG refrigerator, just for fun my 60-inch flat-screen TV, a whole bunch of camping gear and coolers, and all kinds of fun stuff.

Now, let’s get into the tests and see what this little guy can actually do.

Test number one, let’s say you have a power outage, and I want to be able to watch TV and have internet for the entire house, so everybody has entertained until the power comes back on.

We’re gonna be running for this test is a 60-inch LG tv. It also has an Amazon fire stick in the back, you can pretty much watch any programming that you want, Netflix, and etc.

We’re also going to be having a router connected to that, so we have good range throughout the entire house, and that’s going to be boosting the signal of our internet which is coming off of a Verizon which is a MiFi unit.

This would also work if you just had a modem connected because usually in these situations, you’re still going to have internet. You just don’t have the power to run your modem and your router. Usually, these are one on the same device, and all of this is going to be powered off of the Safari LT.

Then we’re going to plug all this stuff up. I’ve got everything turned on, and everything connected and now we’re gonna kind of see how long that actually runs for. Okay, so we are running the 60-inch TV, our Wi-Fi router, our Verizon jetpack is charging you,  have a fire stick in the back of the TV.

And let’s see what we were using there, now 82 watts, so that should last us 5.2 hours. We have total internet for the entire house, so everybody can use their phones, tablets, laptops, watch TV, anything like that.

We’re gonna see if it lasts five point two hours, like it says, it will and that will be awesome during a power outage. All right, so we were watching TV, all of us had internet, the entire house just like normal.

We’re playing on our phones and tablets, and of course, if those got low, we could power those off of the Safari as well, but I left it alone to save the parameters of the test.

That’s awesome, that’s usually going to get you through a normal power outage, and I thought that was a really cool test. We had internet and TV, we could have charged their phones. That’s pretty damn cool, and if you’re doing this during the day with 100 watts solar panel or 140 watts max, you could have used that all day to provide an Internet.

And then, when it came time for the night, you would have had about five hours of battery to run into the night, and you could have started all over the next day. So, I think that’s a pretty cool test.

Now, we’re gonna move on to a bunch of like camping gear, little outdoor coolers, and a bunch of little stuff. Let’s jump over there, and check that out. This is a Dometic cooler. It’s not a compressor-based cooler, it basically drops the temperature of 40 degrees below ambient temperature.

I filled it with some food berries, hummus, cheese, some drinks a water bottle with no ice in it, some ketchup mustard, typical stuff, and we’re gonna see if it’s able to run this cooler.

And now, we’re gonna hook up the solar panels, so we can help but keep up with everything during the day. These solar panels are really everything, are well labeled. It comes with a ton of extra cord. You can put this in the Sun, and leave the cooler and the safari in the shade.

Right now, we just plug this guy in and as soon as we do, we’re gonna have our input watts show up, and we’re pulling 64 watts from that. It is kind of an overcast day, and after we lost Sun about five hours later, I went ahead and checked all the food and it was very cool to the touch.

It was probably about 42 degrees because it was kind of warm outside, and it was in the Sun, but now, that we’re only pulling in five watts, you can see that we have 6.6 hours left to go off the battery, which is great.

So, we can run it for about seven hours, just off the battery which is great. We’re gonna have cold food all the way into the night, and we can start the whole process over again tomorrow.

Watch the video for all test 🙂

I recommend it absolutely, as long as your criteria are correct. If you’re running CPAP machines, electric blankets, all the stuff that I showed you in my testing, perfect awesome.

But, it’s so lightweight and portable, and it runs all the stuff that I just showed you. So,  use your imagination if that’s in your criteria then it’s absolutely crushing it.

In my opinion, I’ve enjoyed using Safari LT, seems well-built, if you want to save fifteen percent on all line energy products which is a pretty big deal click the link down below, thank you so much for watching, and happy camping.