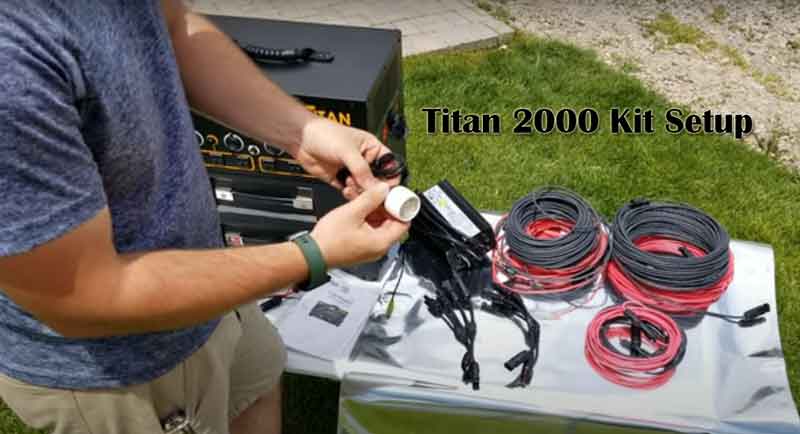 Titan 2000 Kit Setup and Usage – I’m gonna be showing you the maximum the ultimate, the best solar generator kit for the Titan, which is the Titan plus. This charge is super fast. It has plenty of battery storage and as of right now, this is the absolute best portable off-grid solar generator kit anywhere available.

The Titan+ 2000 kit comes with absolutely everything you need to get up and running. There’s nothing missing from it, an additional battery already included. You have the same power module and the original battery, but you get a second one. It comes with the 4 DC charger ports that go into here.

I got two of them, but it comes with four and these two actually each have a USB-C plug in them as well as a USB-A, and then the other two, also have two USB-A plugs in each. It comes with the panel reset cable. This is extremely rare to have to use but in an emergency would be very helpful, if, for some reason, you were somehow able to drain.

The Titan below at safety level on the battery, you could use a 100 watts panel connected to this, and resets the whole system off-grid. It does come with a car charger. This is currently being upgraded and of course, it comes with two-panel adapters, that way you can use pretty much any solar panel out there, and connect it right into the Titan.

Of course, you can get the user manual. This shows you how to troubleshoot everything, how to set up the kits, all those kinds of things, and you’ll actually get six of these USB chainable lights that come with a six-foot cable, and you can connect them together in series to really lighten up your area of operations.

Each one has its own individual light switch to turn on and off. You’ll get two sets of branch connectors in order to connect all 2000 watts of solar panels, which come with one wall charger. Of course, you can always get a second each wall charger puts in about 500 watts while having two of them. Puts in a 1000 watts wall power into.

So, I’m going to show you how to do that right now, and it also comes with two extra-large EMP Faraday bags. Things have been tested through and through every single test has proven that. These are EMP proof, it comes with two of them, so if you really wanted to put one inside of the other, you could make it super EMP-proof which is a different type of EMP weapon.

So, now what I’m going to do is, actually connect this whole panel system up. I’ve already got the panels that are up, on the stands all connected as well as this third row right here, but this fourth row right here still needs to be connected have the 15-foot extension cables added, and have that all run to the branch connectors. And then to the hundred-foot cable.

It’s important to note that the kit does not come with the stand, pretty much solar panel manufacturers don’t make stands for their solar panels. You just have to make it on your own. So, for that reason, I’ve made a very simple to follow and very affordable solar panel stand.

All you have to do take my panel adapters plug them in the Titan. So, just like that, I’ve got my Titan +2000 kit ready to go. On a perfectly clear sunny day, these could potentially be making up to 2,000 watts total which means 4000 watt-hours of battery.

This would likely charge in two hours from zero percent all the way up to 100% as long as I wasn’t running anything. Now, the beauty of this is, I could be running even something like a small air conditioner, or a swamp cooler, TV, lights, fans, fridge freezers, all of that stuff, and still be making enough power to be charging this up.

The likelihood of being able to have a full battery by the end of the day, even on partially cloudy days is extremely high. As I said, it’s the ultimate off-grid system and really makes sure that you’re making enough power to run all your equipment during the day, and still be getting a good charge generally speaking.

The Titan 1000 kit is one of the most popular and for almost 90 percent of people will work for their situation, and then it goes up to the Titan plus 1500, but really what I find is that the Titan 1000, not enough. You’ll probably want to go for the Titan+ 2000 that simply ensures that you can run all of your equipment.

Titan 2000 Kit Setup and Usage – So, that’s it, that’s how you set up the Titan+ 2000 kit. It’s extremely simple, I hope you found this article helpful. Share it with someone, I would bet that you also know someone who’s interested in the system like this, or that maybe lives in a hurricane, or tornado, flood, whatever type of prone area.

Maybe, they just have a lot of blackouts, maybe they just want to run an RV. It doesn’t matter if you want audible solar power anywhere that you want to go, this is the absolute best system to go with.