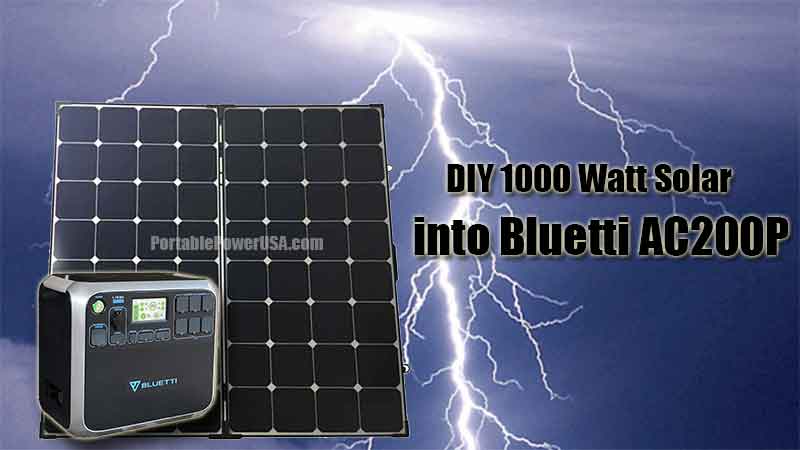 DIY 1000 watt Solar into Bluetti – Do you need a big solar system? Do you need a lot of batteries in your teardrop camper? In your van? In your RV? Well, in this article, I’m going to explore that concept and try out the system and do some tests. And, let’s see what we get for this project.

I’m going to incorporate a fair amount of solar power. I have six of these flexible sun power panels. these are 170 watts each, and I am planning on running these in 3s2ps, which means that I’m going to end up with a system with 88.2 volts at 11.68 amps, got enough mc4 connectors here, and wires to make the two parallel lines connect.

Okay, to test out the system, I’m going to use a Bluetti solar generator. It’s a 2000 watt unit with lithium iron phosphate batteries. It has a solar charge controller built-in as well as a 2000 watt inverter, another thing that’s kind of neat about this unit here is, that it can handle up to 700 watts of solar. But, you can also at the same time, plug in 400 watts of shore power, which means that you could charge up this unit.

DIY 1000 watt Solar into Bluetti – You could bring in at 1100 watts during ideal circumstances, and charge up this unit in like two hours. If you had it, these solar panels were sent to me by a friend and patron in the solar industry. He knew I was doing this project, and asked if you know this could be useful to me. And of course, it is a wonderful setup. Because these are plugged in series.

If I stand in front here, create a shadow, the power gets diminished severely. When these were laying down, I only got about 9 to 12 watts, and then standing them up, got about 90 watts, 80, 90, up to 100 watts. There’s no shadow here. It’s all in the bright sun.

Today is not really sunny, but it is snowy and bright outside. So, let’s plug in a panel, and see if we’re getting any power. Let’s go back here, I’m getting about between six and 12 watts in. These are 170 watts panels, we have six of them. If I would get 60 watts right now, but on the other hand, I mean, it’s not sunny, it’s cloudy, 6 – 12 not bad.

The other thing I’m realizing, just if you have a couple of leaves on here, you know it brings it down dramatically as well. So, we got a little makeshift campsite test here. This is gonna be the first time that I ever have the power coming in from the solar.

So, it says we have 48 power now on the battery, 48 as it’s being funneled in, and being funneled out at the same time. It has passed through charging sausagey, cabbagey, beer, beery 277, what’s right now it is three o’clock in the afternoon. It’s just gonna get less or less. But, if you think about it, okay.

Let’s say you’re at camping right now, currently, I have 54 charges here. Honestly, you’re not going to get that much, more even if you keep these out for a while. Then you have to kind of be a little bit careful. Okay, what are you going to want to do tonight?

Well, you may want to make some coffee later. You’re going to need to charge up your laptop, perhaps this is, of course, that any heat, and then you need to think about tomorrow morning. Let’s see, you get up you want to make some tea, you want to make some breakfast. I mean power goes rather quickly when you start thinking like that, to only have 55 percent in the evening. It’s really not that great, like a thousand watts simulated camping experience.

Number two, getting 211 grilled cheese sandwiches. So, by turning on the induction cooktop using 1200 watts, 17, 14 watts. So, 120 watts in exchange for a sandwich, what do you think about it? So, when the induction cooktop was using it. It used about 1700 watts per hour, but of course, it doesn’t take an hour to make a grilled cheese sandwich in total.

It used 120 watts because it only took a couple of minutes, but that’s also because an induction cooktop is really efficient. It’s only transmitting like it’s only using the heat that’s actually being transmitted into the pan. So, right now, it’s kind of hazy outside. It would take about 30 minutes with this setup to recoup my sandwich, in terms of the energy coming in through the solar into the Bluetti.

Of course, it was sunnier that would like to be really fast after the sandwich. I kind of feel like having hot chocolate. So, I’m going to bring out another appliance that is not really standard for basic camping. But, I’m going to take out my Keurig, and plug that in for the cure used, uses like 1200 watts an hour. If you divide that by 60, you get 20 watts a minute. And to make these two cups took about four minutes.

So, that’s about 80 watts in terms of power for the hot chocolate. So, currently, Bluetti says we’re at 92 percent. It was completely charged when started using it. So, in that case, used eight percent of two thousand watts. So, in total lunch cost 160 watts for a sandwich, and hot chocolate.

Okay, the key feature here really though is that there is a 2000 watt inverter inside the Bluetti which allows you to have these high draw appliances, whereas if that wasn’t there. You wouldn’t be able to use these, use a Keurig, use an induction cooktop.

So, even though we only used like 160 watts in power, you still needed that 2000 watt inverter in order to access that power. It’s a little deceiving, depending on how you look at it. Eventually, I am going to build an awning with this. When it’s folded up, it’s going to show two panels, and then when you fold it all out, it’s going to show all six panels.

DIY 1000 watt Solar into Bluetti – It will constantly have two panels on the roof, and when you are parked and set up, it will have six pedals funneling into the battery bank. And I am going to get a bigger battery bank because while 2000 watts is really nice, I want an integrated system and I’m going to get a larger system, almost twice the size of this. Because I’m realizing like wireless is very nice, and I love that the fact of this is, that it’s so mobile.

You can move it from vehicle to vehicle, that’s really nice. If that’s what you’re looking for, doing this test here though has made me realize a couple of things about solar panels. It’s different when you first get your hands on solar panels, and you can kind of use them in real terms. One of the things I realized is,  that the angle of the panels really matters.

I mean, when I’m doing tests, if I have them straight, especially, later in the afternoon, or whatever. I’m not getting nearly as much. If they’re like that as opposed to, if I prop them up, and the fact that the sun, of course, is moving a lot. So, if you really want optimal solar, you need to be on top of that, and move those things around often.

And of course, it’s hard to find spots that are completely sunny. Unless you’re out in the wide open. I don’t know the desert, or there are no trees, or anywhere, because sooner or later, there’s going to be some tree coming through with a shade. Very few spots are sunny. You know throughout the day, as the sun moves around.

The other thing, it’s just kind of how many panels you really need like two of these panels wouldn’t be nearly enough in order to charge up, like a large system, where you’re funneling a lot of energy back into those batteries all the time. So, you need a lot of battery just because you can’t trust that. You’re gonna get what the maximum capacity is very often.

So, you want to be able to take that window of two hours during that day when conditions are okay, and just like grab as much power as you possibly can during those few hours, which might not even happen every day. So, when it does happen, you need to be able to need a large enough system, so you can grab as much as you possibly can during that precious little time when the sun is shining, and there’s no shade, which means that you need a larger system than you think.