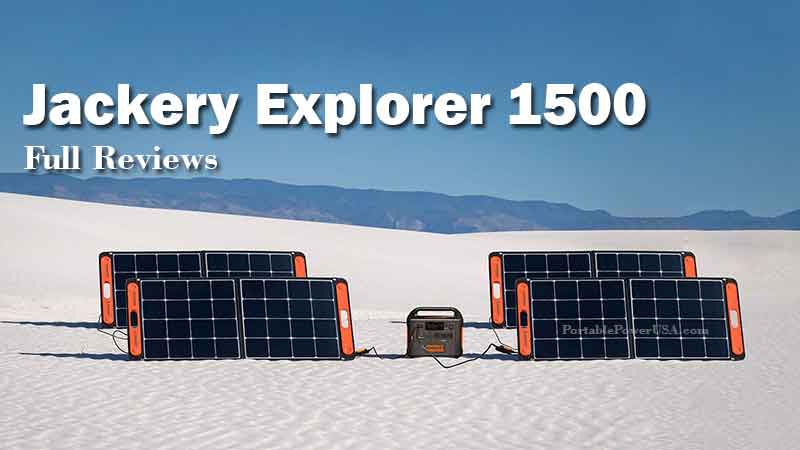 Review Jackery 1500 Watt – When most people think of Jackery, they think about a smaller unit like this 300 watts explorer, but in today’s article, we’re gonna look at this. This is the Jackery Explorer 1500, and it’s one of the biggest units that Jackeryackery has ever made, besides Jackery Explorer 2000.

The Jackery 1500 has some pretty impressive specs. It puts out 1800 watts of running power along with 3600 surge watts. That’s actually more powerful than many of the smaller honda gas generators that are available. The most exciting upgrade on this unit is the display itself. It’s finally full color, and it is a smart display.

This is going to tell you everything you need to know from input and output. But, it also will give you calculated run times and charging times. Jackery kept the same physical design as their smaller units.  You’ve got a built-in top handle that works really well along with this built-in flashlight that’s surprisingly useful along with this brand new 1500.

Jackery introduced their new solar panels. I’m going to connect them up outside, and these are the solar saga 100. Now, these panels put out a max of 100 watts each, but you can actually connect four of them into this Jackery 1500 watt. So, that’s going to give you up to 400 watts of solar input, built-in legs, let you get them set up in just about a minute.

They’ve also included the cables right in the back of the solar panel. All you need to do is take them out,  and then they give you these adapters. This means you can plug two solar panels into one adapter, and now you can plug it into the Jackery using just one of their input plugs. You don’t have to be a solar genius, all you need to do is plug in the panels into the unit.

And now, you know exactly how much power you’re generating. Now, in my case, it was late in the day and I’m only getting about 35 watts of input power, but what I love is the display. I can see that the MPPT controller is working along with, roughly how much time, it’ll take to charge the unit up. Now,  some people buy these, and they don’t really use them. But for me, I use them as a portable extension cord, and I featured this lawn dethatcher on many videos.

It’s one of my favorite tools, but it does have a cord, and that can sometimes be a pain. But, by using the Jackery, it’s kind of this thing is cordless to a certain degree, and I don’t have to be anywhere near a regular outlet. This thing only used about 600 watts of power, and I was able to do my entire backyard with this Jackery, and I didn’t even use half of the unit’s power.

And every port in your Jackery is on the same side of the unit. They include 3 AC outlets, and just like other models, these can be individually switched ON or OFF by the group. You’ve got a 12 volt fully regulated cigarette style outlet that’s rated for 10 amps, and you’ve also got 3 USB ports. The USB-C is rated for 60 watts, and you’ve got 2 regular USB ports.

One of which is quick charging. Jackery made some big improvements around charging the unit. They started by giving you 2 input plugs. Now, that’s handy for the solar panels because you could plug IN 4 solar panels into the 2 splitters. But, you can also use the single AC adapter they include in the box, and if the unit’s at zero percent, you can charge it with the AC adapter in about 6 hours.

This checker is a pretty cool trick, you can purchase a second AC adapter to connect them both IN at the same time, and you’ll double your input charging power to almost 600 watts. That’s gonna let you charge the unit up, in about three and a half hours.

Of course, I wanted to make sure they were being honest about their specifications, and their power quality. So, I connected up to my Tektronix analyzer to see what the unit was putting out.

Now, first of all of the voltage and harmonic noise were well within standards, and I also confirmed that the unit was in fact putting out pure sine wave power. But the bigger question is how efficient is the unit, and if you’re not familiar with efficiency, this can be a big deal on these battery type generators. Because the batteries inside this unit are rated for 1488 watt-hours. Unfortunately, the unit itself uses some of that power to operate.

So, what you’re left with is the usable power that you actually get. The way I tested it out is, I connect up a heater, and I run the unit until it gets to zero percent, or basically shuts off. Our final test gave us 1.191 watt-hours out of a possible 1.488 that ends up at an 80 efficiency rating, and it’s not the highest I’ve ever seen.  But, it’s also not the lowest. I would say that’s acceptable.

Jackery Explorer 1500 Portable Power Station
Price: $1,599.00
The Jackery Explorer 1500 brings the power – that is stable, safe, and it offers huge 1488Wh capacities, 1800W AC outputs, and a fast recharging efficiency, which will run up to 7 appliances all together at once. It will suit your need, and restore happiness – whenever, wherever, for camping, RV/Van life, any outdoor activities, or emergency home backup.
View More Details
View On Store

Now, let’s cover the pros and the cons. The pros of the design have been kept the same which is a good thing because people actually liked it. They’ve increased the power which I really think they needed to do, and the display. They’ve added is perfect. You finally get some real features, so you know how long the unit’s going to charge or discharge.

In terms of cons, there’s still no Bluetooth app or wi-fi connectivity, no wireless charging, and the batteries inside continue to be lithium-ion. They’re not the newer lithium iron phosphate, and I love the new fast-charging options with those AC adapters. But, they are external, so that means, you will have to carry something else.

Now, overall I really like this unit, I definitely would recommend it. But, I wanted you to be aware of all the features before you make your purchase. Hopefully, you liked this article.