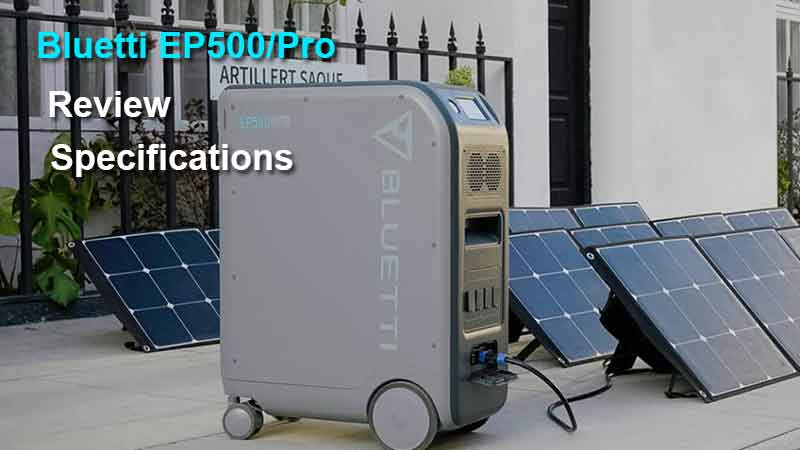 Bluetti EP500 Review And Test – This is Bluetti’s, newest lithium-based battery power station designated model EP500. It’s a 5.2-kilowatt-hour lithium-ion phosphate battery box with a built-in inverter capable of 2000 watt continuous and 4800-watt surge power output. It measures 30 inches high x 12 inches wide x 23 inches deep. It weighs in at 157 pounds. The life before the battery is reported to be good for 6000 cycles.

It has 412 volt AC sockets compatible with 20 amps each on the DC side of things. It has three 12 volts, three amp outlets, two USB-A, two USB 3.0 quick charge ports, a single 100 watts USB-C, a 30 amp RB plug, and two 15 watt wireless pads on the charge side of things. Solar charging can handle up to 1200 watts with two strings of up to six panels in series.

The charge controller can handle 70 to 140 volt DC on the AC port. The charging will max out at 600 watts. The EP500 and the EP500 Pro can both sync up their 120 volt AC outputs to a second unit. And with the use of a fusion power box can both double their voltage to achieve split phase 220 volt AC and also double their power output.

This feature allows you to use this as a complete home backup system, capable of 4000 watts on the EP500 and 6000 watts on the EP500 Pro. Another first is the ability for this system to operate as a dedicated UPS or uninterruptible power supply system with the touch of a button network connectivity via wi-fi, and remote controllable via a mobile app.

Now, all of this sounds great on paper, like all products do, but can this thing actually hit all these specs in the real world. I have been testing it to see if it lives up to spec.

2. Test out the battery capacity

Now, let’s test battery capacity. Something this big, you’re going to want to probably use it as a backup for your entire house right? In this case, I am going to power my entire building. This is a big commercial building. It’s got a transfer switch, and s,o this allows you to disconnect from the grid and then connect for a generator.

If you want to power the generator, you just flip it up. So, let’s turn this guy ON, and I made a special cable that goes from that type of connector and it goes in here, and it goes through this meter so that we can record the energy that’s being consumed. And then from there, it goes into two of these right. We can split the load where I am going to run this unit as hard as I can.

To see where the limits are at, and so, I don’t want to attach to a single one of these connectors. So, let’s flip some switches. Let’s put start, putting some of those loads on there. There we go. This is what the setup looks like. Okay, at this point I connected my entire commercial suite, and this resulted in an average load of 1000 watts with surges of up to 2000 watts.

Let’s see, how much energy we can squeeze out of the 5000 watt-hour battery. And that’s our answer,  just shy of 4.3-kilowatt-hours that comes out to 85 efficiencies, not great, not bad, just average for this type of equipment.

3. Test out the idle consumption

Okay, our next test will be idle consumption. The aim is to find out how much energy the inverter weighs by just sitting there by timing how long the battery lasts while keeping the system powered up. I started the test on a Monday at 8 pm by Wednesday 8 pm. The meter read 69 states of charge consuming 31 of the battery in just 48 hours. It means that it used 15.5 per day.  So, you can expect six and a half days of battery if you leave the unit ON. I was able to verify this as the unit shut itself OFF in the early hours of the following Monday.

4. Test out the usability

Okay, now it’s time to test usability. Let’s try a couple of tools around the shop, and see if we can trip the breaker first up a 7-inch chop saw. Next up, it’s a 4000 watt DJ sound system, and finally, a 120 volts mig welder set to max power. This welder is the tool with the highest search that I currently own. So, I will use this to test the search capacity of the EP500 as you can see 24 amps equals 2880 watts.

Next, electric cars are becoming very popular, and specifically, Tesla. Let’s test how many miles we can charge using the EP500. We started with 47 miles on the car. Okay, so we are an hour and 40 minutes into this test, and we have gained 10 miles 39, and after discharging a hundred percent of the Bluetti, we ended up with 65 miles for a total of 18 miles of range added to this Tesla model 3 standard range plus.

You can watch another test in the video below.

Bluetti EP500 Review And Test – Also remember, this is the smaller version of these. There’s also the EP500 Pro. I don’t know if it’s going to change, it might even be the same components. They’re just, maybe it’s just software stuff. So, if that’s the case, this seems a lot beefier than the other 2000 watt inverters that I’ve seen.

So, here is the wi-fi thing. At the time of this review, there’s only an android version of the app. I don’t have android, so I will have to make another article in the future when they release the ios version of the app. So, that I can show you guys what the wi-fi controls and connectivity that this product offers.

So, there we go anything else, this unit seems pretty well designed. The plastic does seem the same type of rapid prototyping. It’s kind of yellowish, it feels brittle, it feels very light, but no doubt, just like the other models once the production units.

Come about then the materials look a whole lot better, and no doubt that we can expect to see the same thing here. This is the EP500 naked. This is what the internals look like lithium-ion phosphate battery. I think this is going to be pretty cool for people that want to add an easy backup system to their house or building and stuff.

All you have to do is just buy one of these things, and install it, and then you’re gonna be ready to go.