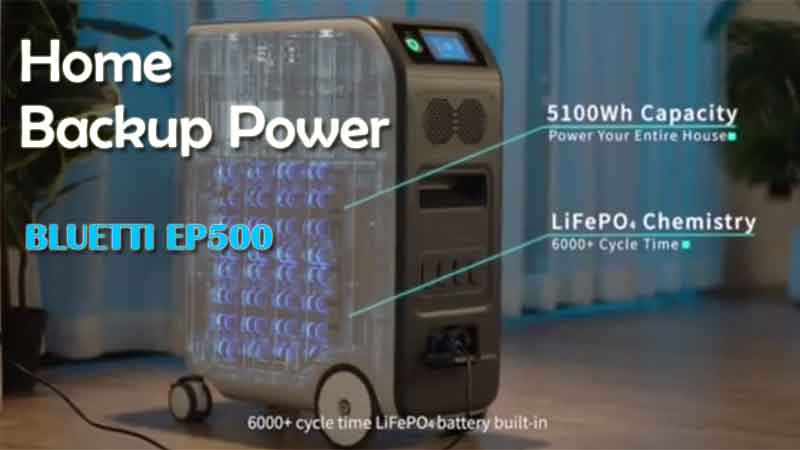 Home Backup Power BLUETTI EP500 & EP500Pro – With BLUETTI EP500 the trouble of power outages never bothers us. The integrated ups function of EP500 can automatically power your home appliances in the blink of an eye when the power outage occurs, 6,000 plus cycle time life lithium iron phosphate battery built-in, features 5,100 watt-hours capacity, makes you feel at ease under any circumstance fluently. BLUETTI EP500 features a continuous 2,000 watts output surge up to 4800 watts, run your loads without breaking a sweat, is that all? No, it’s far more than that.

Home Backup Power BLUETTI EP500 – We have another EP500 connect the cable into the communication interface first then the AC output port, finally, come with a split-phase box. The output power will boost to 4,000 watts from 2,000 watts, and the output voltage will change from 120 volts to 240 volts. Enabling any electrical appliance such as this ambient heater features 3,000 watts at 240 volts. We can view the current working status of EP500 from the app. You can also upgrade the firmware remotely online through the OTA function, fast and convenient.

This EP500 can be recharged with high-efficiency solar power supports up to 1,200 watts, with built-in MPPT can be fully recharged in only 4.7 hours. It can also be recharged via AC charging at the power of about 600 watts, get rid of the heavy brick with only one single cable could cover the charging incredible 1,800 watts power only takes 3.1 hours charging via solar panels, and wall outlet at the same time.

Turn on EP500, the ARM + DSP dual-core system brings extraordinary stability and efficiency, put your phone on top of it, voila! wireless charging.  The 100 watts USB type-c port is compatible with devices such as laptops, decent ports options bring power for all the appliances in your life, control your power, control your life full of power, outages never bother us.

Today, we’re going to be reviewing BLUETTI’s brand new EP500 solar generator. Now, this thing is big, and I mean absolutely massive. It puts out 5,100 watt-hours, and it’s capable of some pretty amazing stuff but it’s far from perfect, and we’re going to take a look at the unit in detail, put it through a series of tests, and help you decide if this might be something for you.

It’s got a modern look overall, that I like they’ve even included four wheels. You’ve got two large ones on the front, and these ones on the back can rotate and lock in position. Now, you’re definitely going to need them because this unit is heavy at 167 pounds and the majority of that weight is due to the batteries. The EP500 uses lithium iron phosphate batteries. These are currently some of the best types of batteries for a battery generator like this because they can handle a lot more charge cycles and they’re actually much safer in terms of a fire risk.

Using it the first time is easy, just flip the built-in circuit breaker to the ON position, press the power button, and wait a few moments for the unit to start up. The built-in screen is full color, and it is in fact a touch screen which makes using this a lot easier than other models. All of the ports in the EP500 are covered, and they’ve split them up to make it a little bit easier to connect things into them. On the top, you’ve got the DC output cover, and when you flip this open, you can see, you have a number of ports you can use.

You’ve got a 12 volt DC 30 amp plug along with a fully regulated cigarette lighter style outlet, and additionally, you’ve got two 12 volt DC 10 amp plugs, and then you’ve got the normal USB with fast charging, and a 100 watts USB-C port, and you’ve also got wireless charging on the top of the unit. You can charge two different devices up to 15 watts each, but you can’t do anything with this unit unless you can charge it up, and they’ve given you two different ways to get the job done. You can charge it via an AC outlet in your house, or by using solar power.

Now, the AC cord is included, just plug it in your regular outlet, and it’s got these pretty cool twist-lock style plugs, just line up the white dots, and then turn the BLUETTI,  and the plug will be securely locked in place. And the best way to charge this device is to use the free power of the sun, and the included solar input cable, it can actually handle between 70 and 145 volts or up to 1200 watts of solar input. That’s a lot of power, and you can charge the unit in as little as 4 hours.

And the cable you see is standard, and included right in the box, using the built-in display is a little bit odd, but it gives you everything you need. The interface can show you how much power is going in and out, the state of the battery, your battery management system, and pretty much. Everything you need to see what’s going on and customize certain settings.

Now additionally, this unit has built-in wi-fi, and they will be supplying you with an app. I had a demo version of the app that unfortunately was beta, and it just didn’t really work. So, I couldn’t show you, you can see in the display, I’m putting in about 561 watts, and that’ll charge the unit up at about 9 to 9.5 hours. It’s also worth noting that the cooling fans are in fact smart fans, and they only turn on when needed, even just a couple of feet away, you’re barely hearing them at all-around 37 decibels.

When you’re dealing with this much power, a cooling system is critical, so the verification was working properly, and there was no leakage, I conducted a smoke test. I put the smoke in the front, and you can see the output coming out the rear, and there was no smoke getting out from any other areas of the case.

The EP500 is rated for up to 2,000 watts continuously which means you should be able to run 2,000 watts at any point in time without causing any sort of fault. And to test that out, I connected an industrial heat gun, started on a low setting, and then I cranked it up, and now I’m taking about 1800 watts. But, I wanted to get this right at the 2,000 watts limit. So, I connected this small heater as well, and now I’m drawing just over 2,000 watts.

I ran this for about 20 minutes. I didn’t have any issues at all, but what if you’ve got something that has a big startup draw, and could draw over the 2,000 watts? Well, the EP500 can actually run 3,000 surge watts, but I wanted to put that claim to the test. So, I added this small heat gun that uses around 300 watts, and we ran it around 2,300 watts, and the unit had no problems whatsoever. It actually ran it for several minutes but then I went ahead and added a much larger heater that used around 1,300 watts to see if I could overload the unit.

What would happen? So, once I plugged in the heater, it was already on and within just a couple of seconds, you can hear the error tone, and the unit shut down. This is exactly what it should have done because the unit would have been drawing over 4,000 watts.

EP500 claims that it puts out pure sine wave power, and it also states that it’s capable of 5100 watt-hours. Now, first, I wanted to check out the quality of the power. So, I used my Tektronix power analyzer, and connected it up, things like voltage, frequency, and harmonic distortion were all perfect but the sine wave was exactly what I was looking for, and it’s definitely putting out pure sine power.

Now, it’s time for the real test, the efficiency test, because these units all have a dirty little secret, and that’s that they don’t really put out the power. You think they do because inside of each one of these devices is circuitry and an inverter that actually uses some of that power that the device stores. A higher efficiency unit is better for you because you’ll be left with more usable power.

So, I put it through a test on the Tektronix that’s kind of like filling your gas tank up in your car, and then seeing how far you can drive. In this case, we put the battery to 100 ran an electric heater, and we measured exactly how much power we could actually get, and this was the final result 4,170 watt-hours.  Now, it’s always going to be less than what they advertise, but that ends up being about an 82 efficiency, and that is a little bit below average, and I was kind of disappointed that it wasn’t a bit higher.

This device also has a really clever feature. It’s got this communication port, and they include this special cable, and if you buy two EP500s, you can actually connect them together with the special interface box, and now you can put out 240 volts power. This is a really complicated thing to do, and this is one of the first production devices I’ve ever seen that actually offered it.  Unfortunately, I don’t have two of them or the interface box, so I can only go by the specs that this will actually work if you choose this option.

Another great feature is this unit can actually be a UPS that means if you connect up a computer or your TV, and the power goes out, you won’t even notice because it keeps the power going to the appliance.

Home Backup Power BLUETTI EP500 – After using this device for several weeks, I really liked it, but I had one major problem, and that was around the weight at nearly 200 pounds. This is going to limit where you can put it, that’s a lot of weight, and even lifting this thing up, a couple of steps can be a real challenge for a lot of people. But, the issue is even bigger than that because this system is not modular, and if anything breaks and you need to ship it back, it would cost you a fortune.

So, I reached out with my complaint to BLUETTI, and I was really surprised by what they told me. They’re actually going to arrange for on-site service if you’re in the warranty period, and they will pay for the return shipping if, in fact, they have to send it back.

So, that single statement really changed how I felt about this unit, because if you don’t get stuck paying or return it that you’re not really going to care if you have to. Because it’s not coming out of your pocket, and if you want one of the biggest units on the market that will give you a huge amount of run time, this is definitely the one to get 5,100 watt-hours. This thing is going to run the largest loads for a long period of time. This could be a viable replacement for a lot of people’s gas generators.