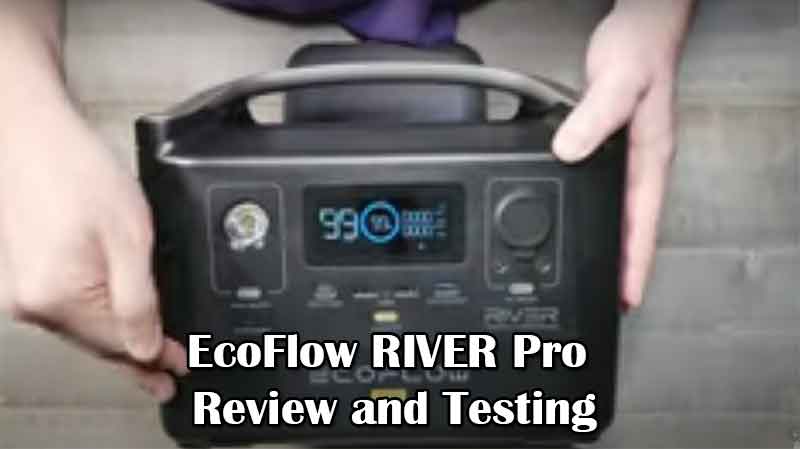 EcoFlow RIVER Pro Review and Testing – Can it charge itself? – This is definitely a cool little product definitely. I’ll use this for various things, I know a lot of times I may be dragging an extension cord out to use a saw somewhere, or say plug in something across the yard, and just not having to do that.

We can just drag this out. This thing has a pretty long battery life, even for some high-wattage devices. So, in the little simple box, they have the quick start guide with everything on how to charge it. Of course,  the solar is going to be slower along with the car charging.

If you can charge it in the home, it’s going to be a lot quicker but pretty cool that they do give you all the different cables that you can hook up everything and charge it with these XT60s and you charge it from the car, etc. Say, for instance, you are going camping, and you gotta make a run to the store, and you’re not near your car, but of course, you run to the store.

You can charge this thing up whenever you’re making that run for whatever amenities, or whatever the significant other. Open this thing up, there are four bolts that run all the way through the handle, and the bottom part is the battery. I wouldn’t recommend opening this thing up, because you could potentially damage things, or damage yourself. Because it is live electronics inside.

So, this is the AC side of things, it just has the neutral and the hot. The ground pin is just going to be kind of loose in here because you don’t have any ground. This thing is portable, there’s a little fan as you can see, that fan will speed up and slow down based on the inverter inside, just to keep things cool.

Now, this one, it was the expansion port. I saw, and it’s for adding like another battery, etc. We’ll see if we can get a closer cut to that, so there are your specs, if you want to pause it, there you will notice the FCC ID has an ESP. It has an ESP chip inside, and no we’re not going to be flashing this thing, because everything just handles with the electronics.

They’re just using it just for the wi-fi, basically, typical cord like you’d see on your pc power supply, and many other devices, and switches, and whatever, plug it in and you can charge this in the house. And it does pull quite a bit of current, but it charges stupid fast.

We’ll show you that of course, you get your little circuit breaker in case it draws too much, and you can charge it here with this xt60. That’s the solar and the car. I had a glare, all right that’s the solar, and the car input, and pretty simple stuff. I guess I was wrong, there is the ability to do the earth ground. I guess, if you really wanted to be a stickler on things, you could attach this to earth ground, but I don’t know.  Many people that go camping, especially off the grid, like say tent camping, that bring a ground rod with them on the front of it.

You get your on-off, you get two USB-A charging ports, I haven’t determined exactly what the amperage is on those, maybe it’s on the bottom. I’ve only used the fast charge just to see how quickly it would charge your phone, and I did actually charge and use a Chromebook off of this USB-C charger, and it did perfectly. Hats off to them for doing USB-c.

Now, there’s also, I know for some kids they may call this a charging port, but a lot of us know these as the cigarette lighter ports on the car, but of course, you won’t be doing a cigarette lighter in those. That’s going to be, for say a charger of some sort, that just won’t fit through USB or whatever else you want to use as 12 volt DC.

It’s going to be more efficient to use something, this DC instead of having to take the DC voltage from the battery, and then turn it into 120 volts AC, and put it out the side. So, if you do have things that can run off of lower voltage, you’ll see it is more efficient. So, turning it on 99 hours of usage based on what you have plugged into it.

There’s the input wattage, how much it’s charging, and then how much it’s sending out. So, you can keep an eye on things exactly right here, on this panel, and it does go off and turns the panel off. So, you won’t be using that electricity of the battery either. Now, you can come over here, and say turn on the light, and this course, if you want to turn the DC on, just long-press these and they will turn on and off.

I didn’t also notice there are some little barrel connectors here, and they do give you some wires, like say for something that will run off of 12 volt DC. So, plug in a LIFX bulb here, it’s an led bulb. Let’s see, if it complains about anything.

Nope, showing no problem of course. You can’t see the color here is blowing out the lens, but you can see the color reflection here. It is in full blue on the LIFX bulb. Let’s go ahead and charge this puppy, and let’s see what happens. You’ll see it starts to ramp up slowly, it gets pretty high up there, and the fan will kick on here.

EcoFlow RIVER 600 Pro
Price: $649.00
3 x 600W AC OUTLETS AND 720Wh CAPACITY The RIVER Pro can power up to 10 devices simultaneously with multiple outlet options, including 3 pure sine wave AC outlets. It offers up to 720Wh power and it weighs just 15.9lbs, which makes it a portable power source for adventure on the go.
Buy Product
View On Store

This thing charges just stupid fast, for the mobile users watching this, we’ll zoom in a little closer so you can see it charging on AC mains. Once you go to charging, it shows the recharge time, it’s in 47 minutes or 58. We’re pulling about 600 watts right now. So, we’re gonna let this charge up, so we can do a lot of our different testing with various appliances, and everything that we get a full battery, so we can well beat the hell out of it.

So overload last, but not least. I’m gonna do infinite power probably not supposed to do this, but we’ll see what happens. Maybe we should do this outside at the output on the right will go through, and then they’ll charge it on the left, definitely made it for fools like me, and won’t let it charge itself. Well, what did we think about it?

EcoFlow RIVER Pro Review and Testing – It is one of the fastest charging ones you can find on the market today. I mean, it charges fully within an hour and a half and even pulls 600 watts AC power straight to it, and charges, and gets it done. Now, not everybody needs some portable power thing, but you never know when things happen, and you wish, you could really charge a bunch of phones, and do lights, and do whatever if you don’t have a generator.

And especially, if you’re going off-grid, and maybe the solar is not that great, because of the weather and your batteries just die, and you just need a little something extra to charge your devices. If you want to check out one for yourself, there are the links down below.