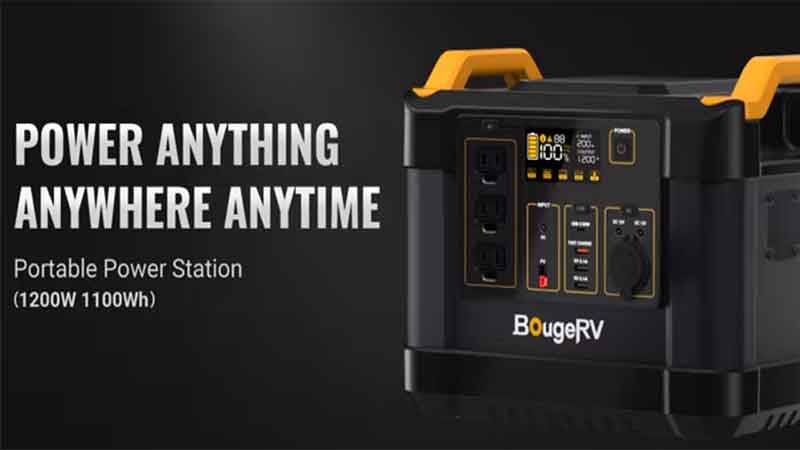 Review Bougerv 1200W Portable Power Station – The Bougerv 1200W Power Station is an extremely powerful and convenient camping electric supply. Its battery can power your home for two or three days. It can be recharged over 1,500 times and offers 2x the life of a standard battery. Its 10 ports allow you to plug in devices of any type and are silent and strong.

Its outputs include three USB-C ports, two-barrel style DC5521 outputs, and one cigarette socket. These charging ports enable you to connect multiple devices to the station including CPAP machines, and monitors. In addition, to charge your mobile devices, the power station also has multiple USB-C ports for quiet charging.

The Bougerv 1200 watts power station offers a range of outputs for your devices. It includes two DC5521 barrel-style outputs and a cigarette-style output. These outputs are perfect for powering a variety of electronic devices such as CPAP machines, and monitors. As it can power up to 1200 watts, it has enough charging inputs to support multiple devices at once.

How to Use the 1100WH Power Station BougeRV

I’ve never owned a power station before but I borrowed my friend’s Jackery 300 which didn’t have the capacity I needed and took what seemed like all day long to charge back up. This BougeRV power station has 1100 watt hour capacity. so that’s almost four times the capacity, and it’s hardly any bigger in size. 1100 Watt hours is large enough to power most devices all day.

The 200 watts quick charging means it’ll be back up to 100 in just a few hours. You can recharge it by plugging it into a wall, or you can use any 12 volts socket inside your vehicle to charge it when driving. My car has both power outlets in the rear. So, when we’re out for the day, I’ll take advantage of the Dual handle portability and move it back and forth between the vehicle and the camper.

Solar power is also an option with the built-in 200 watts PV input, and included MC4 pigtail. We have a big trip coming up in just over a month, so I need to know how to use it, and what it can power.

This weekend, I learned that phones and laptops don’t even phase this thing. I’ve got an old MacBook, and the internal battery only lasts a few minutes without being plugged in. This power station’s massive overkill if all you need to charge is small electronic devices like phones, tablets, and laptops.

Now, we love going out west but burn bans are becoming more of a thing. No open Flames means no boiling water for things like oatmeal and Backpacker meals when we’re at the camper. I’ve been using an electric water kettle lately to cut down on using the Coleman stove, or the pocket rocket electric water kettles pull a lot of electricity. And that’s not a problem when you’re on shore power.

But I knew it’d be one of the larger loads for the power station to handle. My water kettle was pulling over 1300 Watts sustained. This power station is rated at 1200 watts, so that’s a little too much for it. But it was just a thermal switch instead of blowing a fuse. So, I just did it a few times and it still boiled my water and didn’t ruin my oatmeal.

That kettle is too big for a tiny little camper anyways. So, I got a collapsible kettle that’s made for travel. It pulls less than half the power and it has a regular wall plug, so I can use it when we’re on shore power, or I can use it with the power station. So, that problem is solved.

Now, another heavy-use device is my wife’s hair dryer. It pulled over 1500 watts, but it’s really unstable. So, it would peak really high and then drop back down before the power station overheated. She was able to run the hair dryer plenty long enough without any problems with the power station shutting down.

Curiosity got the best of me, and I plugged the power station into our shore power socket. It powered up the whole camper. The LED lights were no problem obviously. But I wanted to see if it’d power the air conditioner, the built-in fan, and the lights together.

Only poured about 75 Watts that’s no problem for this power station. He’d probably charge our phones, and run the built-in fan all night. I kicked on the AC to see if it’d be strong enough to run it. An air conditioner will pull a lot to get started. So, I didn’t think this power station would be able to run it, and to my surprise, it kicked the compressor on, just like when it was on.

Shore power with 1100-watt-hours capacity, I don’t think you’d be able to run the AC for very long. But I was impressed that it was able to handle the big surge of the compressor. Coming on other common uses for these power stations include CPAP machines, 12 volts fridges, freezers, blenders, microwaves, and coffee makers. Those are a really wide range of how people are using these power stations.

Review Bougerv 1200W – I’m really impressed with it. It’ll be riding with me on all my future road trips with or without the camper. If you’d like to see more info on this power station visit BougeRV products.