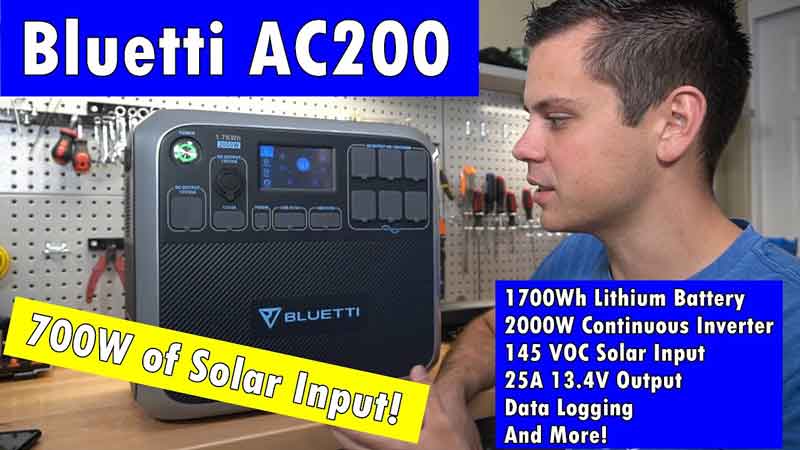 Bluetti AC200 2000W Inverter, 700W 145VOC Solar Input, 1700Wh Lithium Battery! Today, we’re gonna test and review the AC200 by Bluetti. This is the first time in months that I’m actually excited to do a review because this is exactly what I told them to build about a year ago.

They asked me what specific features would I want in my own system, and they actually built it and I think this will be perfect for van and RV dwellers like a midsize system. I would not recommend this for a cabin size system but for everything smaller than a cabin, or a tiny home, this is perfect, and when I first was introduced to Bluetti, I thought it would fail pretty badly but every single unit that I’ve gotten has had zero issues.

The only downside was that the inverter was too small on some of the last units, and everyone that has
a Bluetti likes them a lot. So, I’m actually pretty excited about this.

So, first, let’s talk about the basic features, you have 1.7 kilowatt-hours of capacity in a 2000 watt pure sine wave inverter. We also have a regulated DC 12-volt output that’s capable of handling 25 amps. You can run like 2 DC fridges of this completely. Next, we have a marine-grade 12-volt cigarette lighter adapter that’s capable of 10 amps, and then 2 plugs for 3 amps,  and then we have USBs, and then we have 6 outlets over here.

On the previous Bluetti models, it was limited to two when you press the power button. This screen
will turn on and this is a huge upgrade over the last Bluetti’s. You actually have a touchscreen in an interface that tells you how much power is going in and out, or to the DC loads, and look at this, isn’t this incredible? And this is where you turn the inverter on, AC output on. Do you see output on?

Bluetti AC200 2000W Inverter, we actually have power, it even tells you how much power is coming from an AC outlet or from the photovoltaic or a car charger, and you can even change the settings for the inverter, or the DC input source. And there’s also an eco mode. So, if there are small loads attached to the inverter, it will shut, it
down to save power, and then you also have more settings, language setting, buzzers setting, and that’s pretty much.

Most of these are pretty, you and most people won’t touch them but it’s cool that they even have a setting menu in my favorite. The new section is the data logging. So, first, we have product info, and that’s pretty boring but inverter and charger if you want to see how much power your solar array has produced through the Bluetti. It shows you how many kilowatt-hours the carbon dioxide emission that you have offset, the Watts amps, and the volts, and so much other cool information.

We also have the adapter charger to see how many watts are coming through that. If you want to see
how much power you have used through the DC output such as a 12-volt fridge for off-grid use, you can see it right here. And even shows the current going through every single plug, and look at that, we have a spelling error. They put added another P right there. So, they’re gonna have to do a firmware update.

I wish these companies could actually check that. So silly, it’s so ubiquitous in our market anyway. Let’s
go back out AC output, if you want to see the watts going through your inverter, it will tell you all of this good stuff right here. So, you have more access to a lot more information compared to the last Bluetti and then we have the BMS maintenance menu.

It shows you the nominal battery voltage, the battery current the state of charge and temperature, and let’s see what else. Look at this, it shows you the individual cell voltages. That is actually really impressive. I’ve never seen a solar generator do that. That’s so cool, there’s also a fault menu. So, if any of these over or under voltage, or short-circuit, events were to occur, it will tell you.

So, a lot easier than just hearing an inverter beep all day long. This will actually tell you what’s happening. So, these are the outputs on the left side. We have the inputs down here, and you have 2 inputs. This is for car charging and photovoltaic or solar panel connection, and this is the input for the
AC adapter and this is the wall charger.

It looks massive, so let’s plug it in, and see how fast it charges. We’re getting 370 watts, so it would take
four and a half hours to charge up this capacity of the battery. Now, let’s test the DC voltage at the receptacle, and we have 13.4 volts, so it is accurate with what it showed on the screen which is good. This model comes with the cables charge it, and they are really nice.

These are some of the nicest cables. I’ve seen from a solar generator, you have multiple options for connecting solar panels or a car charging, and for the output, you even have an Anderson power pole. This connects to the DC output for 25 amps, and I specifically stated that I wanted this, and they actually made it.

Now, let’s talk about in my opinion its best feature is the solar charging capability. It is better than everything else on the market because it can handle 145 volts open circuit for the solar input. That is
a 3 or 5 fold difference compared to goal zero, or even their past models. That is very impressive,  now you can have 700 watts of solar, and you can put 7 x 100-watt panels in series.

You can watch the video for other tests.

I think people can actually buy this one because I’ve never been able to kill my previous Bluetti’s.  I think this will be a great unit for most people. So, I’m actually pretty impressed so far. It passed my inverter test which there’s only one other generator on the market that has done that.