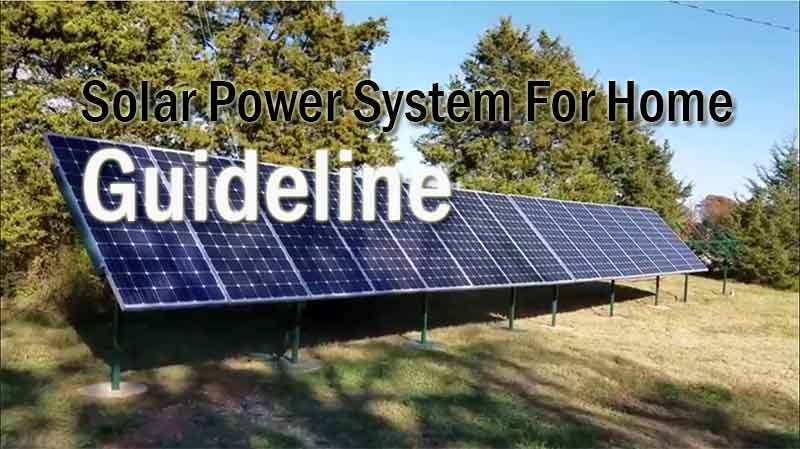 Solar Power System For Home – Every hour the earth is hit with more energy from the sun than the entire world consumes in a year. Solar panel systems for homes are increasing in popularity and decreasing in price. Many homeowners are discovering the advantages of solar power, and you may have even seen quite a few systems being installed in your own neighborhood.

If you’re solar curious and want to learn more, it can all seem a bit overwhelming. You’re probably wondering how much does it cost to install a solar system, and how much money will I really save on my electricity bill?

Let’s start with the basics. In this article guide, we’ll provide you with a general overview of solar energy. So, you can have a strong foundation of knowledge and make the best possible educated decisions regarding solar power for your home.

What is a solar panel?

First things first, what is a solar panel? A solar panel or photovoltaic panel is a panel of native solar cells. Solar cells are the essential component by which light is converted into electrical energy, and they’re usually made up of crystalline silicon. Each solar panel usually contains from 32 up to 96 solar cells depending on the way solar cells are made. Solar panels are categorized as polycrystalline, monocrystalline, or thin film.

The first two categories which are the most common types of solar panels are made of crystalline solar cells. The third category, the thin film is made of amorphous silicon apart from the typical framed solar panel. There are also other types of products that can be used in residential applications.

Frameless solar panels have been on the market for more than a decade, also solar shingles and solar tiles popularized by the tesla. Solar roofs are two types of products that are becoming more popular among residential applications because they combine the technology of solar panels with aesthetic integration into the house.

Solar cells produce electricity by converting the tremendous solar energy that the earth receives every day into the form of sunlight and more specifically in the form of photons. Most typical commercial solar solutions convert sunlight to electrical energy at an average efficiency of 3 to 17. If we could break the sunlight into the smallest possible pieces, we would get photons. Photons practically are the smallest possible energy packets of sunlight.

First of all, the top layer of solar cells has an anti-reflective coating which helps them collect as much light as possible. Right below, we have the main layer of a solar cell which is basically a sandwich of two silicon layers. These two layers are specially treated so that the upper layer has a surplus of electrons. While the bottom layer has a shortage of electrons which is needed for the extra electrons to move from the upper to the bottom layer is a little bit of extra energy.

Solar panels definitely do not generate electricity during the night. But, you can store excess energy collected during the daytime in a large battery. It’s important to place solar panels somewhere where the sunlight can hit them directly, and not be obstructed by sources of shade like trees.

How Does Solar Power Work?

In order to have a complete system that will produce electricity for your home, you need the following components:

An inverter converts the DC electricity generated by the solar panels into an alternating current. The solar panels are connected to the inverter, not one by one, but in groups that are called strings.

In order for the AC electrical current to be distributed to the grid, or to the house. An electrical panel with the necessary switches, circuit breakers, and wiring must be installed.

While a power meter is used to measure the electricity produced from the installed photovoltaic system. Many modern systems have handy apps for your phone, so you can see exactly how much energy you’re producing, quite satisfying.

In the case of an off-grid system, the electricity generated by the solar system will be used to cover 100 percent of the electrical usage of a home since the house is not connected to the electrical grid of the power company at all.

This can be accomplished by using large batteries that will store any extra electricity produced during the day. The main disadvantage of an off-grid system is its cost. Since the use of batteries increases the cost by about 20 to 30 percent compared to an on-grid system. Many jurisdictions do not allow you to operate your residence off-grid. So, you’ll have to check.

This leads us to net metering. With net metering, your monthly electricity bill has been calculated both ways based on the net of your overall energy consumption and the monthly output from your solar panels. If you’re producing more energy than you’re using, the utility company will actually pay you.

How much will you save on bills?

How much you actually save depends on a number of factors. Most important of which include of course, how much electricity your home or business uses. The average annual electricity consumption for a US residence was 10,766 kWh an average of 897 kWh per month.

And a typical domestic solar installation aims to offset 70 to 90% of your monthly usage. Of course, the exact savings on your electricity bill depends on other factors. If your family has electric cars that need daily charging, your electricity requirements might be much higher.

If your house is in a less sunny state like Connecticut, that means that a 5 kilowatts system could offset between 6 – 8 % of your electricity bill, depending on how sunny your region is. Based on the average annual electricity consumption of approximately 10,000 kWh.

There’s a great online tool where you just plug in your address, and it calculates how much electricity you can generate, and how much money you can save on your electric bill. The available surface on your roof, the unshaded part with the appropriate orientation, determines how many solar panels you can install and consequently your savings.

A simple case to have in mind is that you need roughly 350 square feet in order to install 20 solar panels which would have a total power of 5 kWh, an average size solar system in the u.s. That tool, I just mentioned actually allows you to select your roof on google maps, and it factors it into the calculations.

2. Inclination and orientation of your roof

The Typical Cost Of A Resident System

You can deduct 30% from the current federal solar tax credit, and there are also many other localized incentives offered by your state or your utility company. These prices of course vary depending on, the brand of solar panels, the size of your installation, your installer, and also on your state. This is just to give you a rough idea of what to expect.

The best way to get a good price on solar is to compare quotes from many different installers, And there are some great services for that.

1. The Best Size System For You

Based on the parameters we’ve already mentioned like cost, electrical consumption of your house or business, and how sunny your region is. A solar energy system provider can help you determine which would be the ideal system for you, in order to save as much as possible on your electrical bills.

Don’t forget that there are many choices regarding brands of solar panels and solar inverters, and a good installer will help you select the optimal system for your budget.

The most important parameter that determines whether or not a roof is appropriate for a solar panel installation is its inclination and its orientation. Your solar energy provider can calculate exactly how much sunlight your roof will receive during the whole year.

Although solar panels have a weight of only about 2 – 4 pounds per square foot, structural safety is definitely another important factor. For new houses, the design of the whole mounting structure with solar panels must include a static evaluation of the roof. For existing homes, the service of a professional structural engineer is required in order to carry out an inspection of the roof structure and do a calculation of the structural loading capacity.

As there are practically no moving parts in a solar installation, minimal maintenance is required. However, routine maintenance is needed in order to ensure the system is performing properly. Solar panels require routine inspection for signs of damage, the buildup of dirt, or shade encroachment.

Although solar panels are usually designed and installed in order to be cleaned by rainfall, they should be cleaned manually if there’s a buildup of dust or any other obscuring material. Periodically system mounting structures must be checked for corrosion in order to ensure the photovoltaic system is safely secured.

Also, any solar system connected to the electrical grid of a house is an electrical installation, so a licensed electrical engineer should be appointed periodically to ensure electrical safety.

To sum up Solar Power System For Home, here are some pros and cons of solar systems. Pros: True renewable energy source, reduce your electricity bill, and provides insurance against rising power prices, low maintenance cost, and financial incentives from the government. They operate quietly with no moving parts and emit zero pollution. They have a long service life and reliability in operation.

Cons: Initial costs, but marginal cost drops to zero once the price of installation is paid off. Weather dependent so it is an intermittent energy source and cannot be relied on in critical applications. Energy storage systems to smooth demand and load like the Tesla power wall are expensive.

Are you ready to go solar? Check out our products for the solar potential of your home. If you have any questions about solar, feel free to ask us in the comments below and we’ll do our best to get to as many as we can. This concludes our article featuring some basics about solar panel systems for homes. If you found this article helpful or interesting, please spread and share. Have a good day!